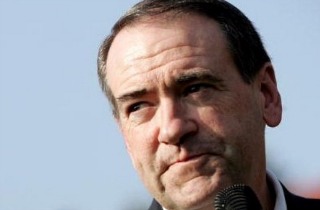 On his radio show Wednesday afternoon, former Arkansas Gov. Mike Huckabee suggested that new gun control efforts could bear similarities to how pre-Nazi Germany devolved into a brutal dictatorship. After making the comparison, he then preemptively rebuked critics of the Nazi/Obama comparison, saying that despite their protests, such analogies represent “the truth.”

After a caller into The Mike Huckabee Show expressed concern that well-intentioned gun registration programs led to confiscation and eventually dictatorship under the Nazi regime, Huckabee agreed, noting that “When you bring that up you get people who get crazy on us, and they’ll start saying, ‘Oh there you go comparing to the Nazis.’ And I understand the reaction, but it’s the truth.”

He continued: “You cannot take people’s rights away if they’re resisting and if they have the means to resist, but once they’re disarmed and the people who are trying to take over have all the power, not just political, not just financial, but they have the physical power to domesticate us and to subjugate us to our will there’s not a whole lot we can do about it other than just plan to die in the course of resistance.”

Huckabee later praised the caller for bringing up the comparison, telling her, “I appreciate you bringing it up,” and adding that “I know that people are probably calling and saying you know you shouldn’t have brought that up. In every society and culture where dictators take over, one of the things they have to do is get control of the military and the police and ultimately all of the citizens and make sure the citizens are disarmed and can’t fight in the streets.”

He concluded: “Gosh I hope it doesn’t come to that.”