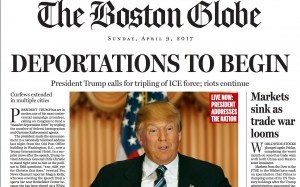 “When you reach the end of your rope, tie a knot and hang on.”
-Abraham Lincoln

The Boston Globe — once a proud, profitable publication — is reaching the end of its rope. The New York Times once tried to save the Globe in 2001 and sold it three ago at a 95 percent loss (NYT paid $1.1 billion while only fetching $70 million upon selling it). Its delivery woes after hiring a new California-based company were so apparent this year that its own writers had to help pitch in to get the paper to their final destinations. Job cuts via buyouts and layoffs continue to shrink the paper to a skeleton of its former self. Circulation and revenue have suffered as a result, as the Globe doesn’t even rank in the Top 20 on the circulation front, trailing much smaller cities/regions evidenced by it getting beat by the Honolulu Star-Advertiser and Las Vegas Review.

Most papers are struggling in a digital media age, that’s understood. But the Globe has won 23 Pulitzers since 1966, including in 2003 after its investigation into sexual abuse in the Catholic Church that spawned 2015’s Best Picture winner in Spotlight (my review here). Most impressive about the movie? The professionalism and meticulous nature of its reporters and their allergy to all-things sensational and phony.

And those two words serve as an appropriate transition to what the Globe has become as evidenced by its front page full of fake news this morning in its Ideas section in a pathetic effort to save a sinking ship (conveniently leaked to the Drudge Report yesterday to create buzz in advance). The sole focus, of course, is Donald Trump… and what would happen to the country in the eyes of the Globe editorial board if he somehow won the presidency.

The horrible hypotheticals — which are all based on Congress or the Senate having no say in Trump proposals actually becoming law — include screaming headlines of, “DEPORTATIONS TO BEGIN: President Trump calls for tripling of ICE force; riots continue,” while other stories include “Markets sink as trade war looms,” “US soldiers refuse orders to kill ISIS families,” and “Trump on Nobel prize short list.” And of course, no Trump story is complete without mentioning Fox’s Megyn Kelly, who is relegated in 2017 to tweeting from a bar because she has been placed on a White House black list. As someone whose mother’s maiden name was Gallagher, the Irish-shaming of Kelly by portraying her as someone who turns to alcohol when times are tough is shameful, by the way (sarc).

Per the Globe‘s editorial board:

“This is Donald’s Trump’s America. What you read on this page is what might happen if the GOP front-runner can put his ideas into practice, his words into action. Many Americans might find this vision appealing, but the Globe’s editorial board finds it deeply troubling. Read our editorial…for more on the dangers of Trump’s vision.”

Translation: While this may seem like a joke, it’s actually a very real scenario. From a media perspective, not sure when Trump said he would control broadcasting/content of a cable network or call for particular talent like Kelly to be taken off the air, but hey… it’s not like the current Administration used its Justice Department to actually spy on any reporters or anything, right? And by the way, the editorial also recommends that the GOP nominate Mitt Romney or Paul Ryan instead, which also happens to be the Republican ticket the Globe didn’t endorse back in 2012.

A few questions: Why publish a fake front page worth of news on April 10th and not April 1st? Why wait nine days? And why wasn’t this exercise done for another presidential candidate in 2008 with limited experience and a vision of what roughly half the country found troubling in Barack Obama’s vision? The same fake front page could apply to Bernie Sanders‘ vision just from an economic perspective as well.

But we know that’s not going to happen, because the Globe thinks alienating many of its readers only on one side of the political aisle is smart journalism and good business. What’s that? Trump isn’t popular in liberal Massachusetts, even among Republicans? The numbers say otherwise, as he scored his highest percentage of the vote there more than any other state so far (beating John Kasich — whom the Globe endorsed before that primary — 49 to 18 percent). Turnout was at record numbers…

No matter… the Globe is super-excited about sabotaging its reputation to the point of being willing to push the initiative beyond its own pages. Here’s what popped into my inbox last night at the end of a heads up the fake front page was coming today:

Advocacy journalism at its finest. And look, if you want to oppose Trump, stop Trump, run with the #NeverTrump movement, knock yourself out. He’s been plenty criticized in this space and on television. But editorials — ones dealing in fact and not hyperbole — belong on the editorial page. Fake news should be handled by comedic professionals (geniuses, actually) at The Onion. The Boston Globe breaks Rule #1 while failing miserably at rule #2.

The editors felt a Hail Mary was in order as it screams to be a force again. Plenty of big news deserved to be on the front page of its Ideas Section of its Sunday edition. What we get were hypotheticals and hysteria instead.