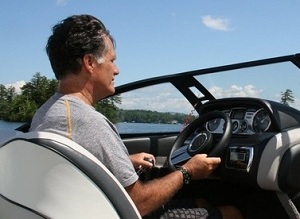 Buzzfeed‘s Andrew Kaczynski continued his site’s curation of the Mitt Romney Awkward Moment Museum today by posting an account of the presumptive GOP nominee’s  “little reported” disorderly persons arrest from 1981. We actually did report on that incident in November, but Kaczynski is right, the mainstream media has so far ignored that arrest, as well as the other incident we reported on then: Romney’s altercation with a volunteer traffic cop at the Winter Olympics.

Both incidents were part of a New Republic profile of Romney which tried to sell the notion that the former Massachusetts Governor has an anger problem, but came closer to humanizing him than anything else I’ve read. Political journalists have notoriously low thresholds when it comes to labeling a politician “angry.” Just ask Howard Dean, or John McCain, or even famously even-tempered President Obama. While Romney has had a few well-publicized deviations from his normal emotional flatline, notably his attempted Vulcan neck pinch on Rick Perry during a debate, there’s little in the New Republic story to support the idea that the candidate is some sort of Bill Bixby character, one shove away from monstrous rage.

The piece did recount a few amusing anecdotes, including one in which Mitt is alleged to have lost it on an incompetent traffic cop:

…at the 2002 Salt Lake City Winter Olympics, Romney found himself stuck in a huge traffic backup on the road to the men’s downhill ski area, because some buses had not received the proper security-clearance placards and were being prevented from proceeding. Romney, who had organized the Salt Lake Olympics, jumped out to take charge. He started directing traffic, over the objections of a sheriff’s deputy, Kodi Taggart; she later filed a report on Romney’s interference. And he lit into an 18-year-old volunteering as a security officer, Shaun Knopp. Knopp told reporters that Romney had asked “who the fuck” he was and “what the fuck” he was doing and had then told him, “We got the Olympics going on, and we don’t need this shit going on.” Romney denied this at the time, saying he had not used such language since high school. “I would not, have not, and never would use the f-word,” he said. The worst word he used with Knopp, he said, was “H-E double hockey sticks.”

The image of Mitt Romney hopping out of his car to direct traffic, and asking those directing traffic “what the fuck” they’re doing is not only comical, it’s immensely humanizing. I like that guy. Maybe that makes this story a two-fer, since there are probably a lot of voters who like the guy who says “H-E double hockey sticks.” That alone should nail down the elusive Granny Vote.

In fact, in almost all of the situations described in the piece, Romney’s actions appear perfectly normal. Maybe that says something about me, but I can completely relate to Romney’s impatience with fellow air travelers, or his move on Perry (which I thought was a very strong bit of power politics, until he tried to complain to the ref), or his defiance of a tin-plated park ranger intent on ruining his vacation, which is the subject of the Buzzfeed piece:

In June 1981, Romney and his family were about to launch their motorboat on Lake Cochituate, west of Boston, when a state park ranger alerted Romney, who was 34 at the time, that he risked a $50 fine because the boat’s registration number was painted over. According to news reports that emerged during his 1994 run for Senate, Romney believed that the number was partly visible, and, against his wife Ann’s advice, proceeded to launch anyway. “I figured I was at the state park with my kids,” Romney told The Boston Globe in 1994. “My five kids were in the car wondering why we weren’t going out in the boat, so I said I’d launch and pay the fine.” The ranger ordered him to shore, put him in handcuffs, and drove him, still in his wet bathing suit, to the Natick police station, where he was booked for disorderly conduct.

Again, the thought of a bathing suited Romney being hauled off to jail is not only hilarious, but very humanizing.

Of course, a lot has happened since November, and these incidents could further benefit Mitt Romney. Critics on the left and the right have noted Romney’s inability to stand up to the likes of Rush Limbaugh, Ted Nugent, and American Family Association’s Bryan Fischer, but as these stories illustrate, Romney has a long record of standing up to traffic cops, on land and at sea. If North Korea ever cuts America off on the freeway, I think we’ve found our guy.