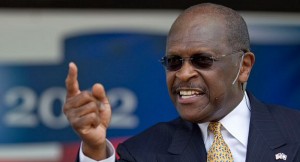 In just the latest of a raft of stunning poll results, upstart GOP presidential candidate Herman Cain now leads former Massachusetts Gov. Mitt Romney among likely Iowa Republican caucusgoers, according to a new poll by Public Policy Polling. The survey shows Cain getting 30% support, versus 22% for Romney, with former frontrunner Rick Perry in fourth place at 9%, and Iowa straw poll winner Michele Bachmann tied for fifth at just 8%. While this result is scary for Romney, it’s downright morbid for Perry and Bachmann.

So far, Cain’s ascent has been mainly at the expense of Rick Perry, a nuisance that Romney is probably glad to be rid of, but now that Cain shows signs of beating Romney, too, it’s time Romney got a little worried about Cain.

For Perry, and especially Bachmann, a win in the Iowa caucus is crucial to the viability of their candidacies. Romney can withstand a Cain win in Iowa, but Michele Bachmann definitely can’t, and Perry could use a win there, too. Cain has made inroads into Romney’s lead in New Hampshire, but still trails by considerable margins in all polls there.

In another recent Iowa poll, Cain placed second at 20% among “likely voters,” to Romney’s 23%, and at 16% among “potential voters,” with Romney also at 23% in that category. It’s a trend that’s been showing up in a lot of recent polls, with Cain polling better in surveys of likely voters, than in those that include leaners. PPP delved into that phenomenon in their press release:

Cain leads Romney 2:1 (38-19) among the 42% who say they are firmly committed totheir first choice, while the two are tied at 27% among the 58% who may change theirmind. Johnson, with his one supporter, has the most committed yet small base. Hislibertarian compatriate Paul is next; 53% of his voters are with him, do or die, then 52%of Perry’s, half of Cain’s, 43% of Gingrich’s, and then only 34% of Romney’s and aquarter of Bachmann’s. Romney has had consistent but soft support.

Those numbers bode well for Cain’s chances to become the first Republican not to flame out after capturing the lead from Romney.

Cain vaults into lead over Romney in Iowa caucus, Perry in 4th

Raleigh, N.C. – Herman Cain has surged into the lead in Iowa, and Rick Perry and
Michele Bachmann crashed, with three months still to go in the race for the first
nominating contest. Cain has 30% to Mitt Romney’s 22%, Ron Paul’s 10%, Perry’s 9%,
Newt Gingrich’s and Bachmann’s 8%, Rick Santorum’s 5%, and Jon Huntsman’s and
Gary Johnson’s 1%.

When PPP last polled the state in August, just after Bachmann’s
straw poll win and Perry’s entrance into the race, Perry led with 22% to Romney’s 19%,
Bachmann’s 18%, Paul’s 16%, Cain’s 7%, and Gingrich’s and Santorum’s 5%, so Perry
has dropped 13 points, Bachmann ten, and Paul six, while Cain is up a whopping 23
points, and Romney and Gingrich each three over the course of a month and a half.

Cain’s support could only grow if other candidates are not viable at certain caucus sites.
He and Gingrich, who were first and second in PPP polls in North Carolina, West
Virginia, and Nebraska last week, get the most second-choice support. Gingrich is the
fallback of 17%, followed by Cain’s 16%, Perry’s 12%, Romney’s and Bachmann’s 11%,
and Paul’s 9%. Cain gets the plurality of Bachmann’s, Santorum’s, and surprisingly,
Romney’s backers, while Gingrich gets Cain’s and Paul’s, and Romney pulls Gingrich’s
and Huntsman’s. Perry’s support is spread around.

Cain leads Romney 2:1 (38-19) among the 42% who say they are firmly committed to
their first choice, while the two are tied at 27% among the 58% who may change their
mind. Johnson, with his one supporter, has the most committed yet small base. His
libertarian compatriate Paul is next; 53% of his voters are with him, do or die, then 52%
of Perry’s, half of Cain’s, 43% of Gingrich’s, and then only 34% of Romney’s and a
quarter of Bachmann’s. Romney has had consistent but soft support.

“Herman Cain not only has the lead in Iowa, he also has far more committed supporters
than Mitt Romney,” said Dean Debnam, President of Public Policy Polling. “That doesn’t
mean his support will be lasting though- just ask Michele Bachmann.”

PPP surveyed 311 probable Iowa caucusgoers from October 7th to 10th. The margin of
error for the survey is +/-5.6%. This poll was not paid for or authorized by any campaign
or political organization. PPP surveys are conducted through automated telephone
interviews. PPP is a Democratic polling company, but polling expert Nate Silver of the
New York Times found that its surveys in 2010 actually exhibited a slight bias toward
Republican candidates.