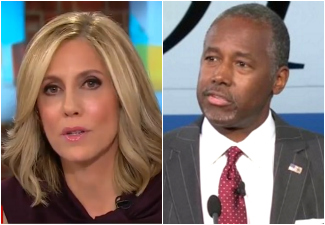 The fork in the road for a largely-untrusted media and the GOP candidates it covers is now upon us.

One road for said candidates involves answering any question asked of him or her. The question may be perceived as loaded, editorialized, even blatantly biased. But if you’re a Republican, you simply accept this is going to happen and not complain … because when the general comes around, the complaining about unfair questions goes from being a badge of honor with primary voters to looking defensive and weak with voters of the unregistered variety.

The other road is one Ted Cruz and Marco Rubio most notably took last week on CNBC to the delight of many conservatives watching: Get asked a question deemed partisan by the one receiving it, ignore really answering said question, and proceed to lecture about how one-sided the media is in favoring one party. The friendly crowds yell, “Right on!” and a Cruz and Rubio feel good for finally punching the media bully back.

So the aforementioned fork represents this: If a politician is asked a question they don’t like — fair or not — they can answer in some kind of version of this: “You know…that kind of question is a perfect example of the bias that exists in the media today. I’m willing to bet you’ve never voted for a Republican candidate for president or even for the Senate or House. So why should I answer when I know you have a vested interest in seeing Democrats in power? You have no ability to be objective and therefore don’t deserve to even be asking the question.”

It’s the newly paved alternate route on the road to 2016. And along the way there’s now an EZ-Pass lane where one didn’t really exist before. We saw the scenario play out on CNN this morning, as New Day co-host Alisyn Camerota pressed GOP frontrunner — at least in some polls — Ben Carson on an alleged violent childhood event that happened 45 years ago. Short version: Camerota asked why CNN reporters couldn’t find anyone to corroborate Carson’s attempted stabbing story. Carson responded by stating the stabbing incident he described in his 1990 book (Gifted Hands) was private, and he wanted to protect the person involved from a media onslaught, who happened to be a relative (originally characterized as a close friend): “I talked to him yesterday. He was a family member, and you know, I really don’t want to expose him further. I talked to him, he would prefer to stay off of the media, and I think I want to respect that.”

But here’s where the interview hit the fork: The candidate then went off on CNN and the media’s vetting process of him in general:

“This is a bunch of lies attempting to say I’m lying about my history, I think it’s pathetic, and basically what the media does is they try to get you distracted,” he said, later adding, “The vetting that you all did with President Obama doesn’t even come close, doesn’t even come close to what you guys are trying to do in my case, and you’re just going to keep going back, ‘He said this 12 years ago’ — it is just garbage…Give me a break.”

Questions: Is vetting Carson’s stabbing account fair game since he chronicles it in his book? Yes. Is it true? Only the other person involved in that incident that may or may not have occurred in 1970 can answer that, and he’s not talking for now.

More questions: Was then-candidate Obama held to the same intense level of scrutiny around details of his autobiography, which includes stories of a composite girlfriend he had back in college? (think Manti Te’o’s never-alive-therefore-not-dead girlfriend or Anthony Michael Hall’s Niagara Falls version in The Breakfast Club). No. The revelation of said composite GF was only revealed three years after the 2008 election.

Does Carson therefore have a good point? Yes. But that’s not Camerota’s problem on a Friday morning in November of 2015 when her job is to interview Carson. Ultimately, the host asked fair questions and thankfully didn’t get on a soapbox — by not appearing to take his narrative around media bias personally — when Carson pushed back (like others asking in the same situation surely would have).

So here’s how this will play out: Those who hate the media and have serious trust issues with it will see Carson being subjected to what they view as a ridiculous witch hunt on an event that may or may not have happened more than four decades ago, and therefore isn’t newsworthy … all in an attempt to bring down his candidacy. Easier said than done, as Carson’s trustworthy numbers are at an eye-popping plus-34 right now (60 percent say he’s trustworthy, 26 percent say he isn’t). Juxtapose that with Hillary Clinton‘s numbers on the same topic, where she sits at negative-26 (35-61) or Donald Trump (minus-18, 38-56). But the real comparison is how much the public trusts the media as a whole, which Gallup has at negative-20 (40 percent trust, 60 percent don’t). That’s way down from a plus-10 rating in 1999 (55 trust, 45 percent don’t), or a 30-point swing. Among Republicans, the untrustworthy number goes even higher (68 percent). And if you watched the CNBC debate (first question to all: “What’s your biggest weakness?”; first question to Trump: Are you running the “comic book version” of a campaign?), it easy to understand why.

Attacking the media’s credibility isn’t such a bad move, at least leading up to the primaries. So when Carson, or a Cruz or Rubio or Trump or even a Clinton (she once insisted the only people talking about her email controversy were not voters she met on the campaign trail, but the media) thinks they’re asked an unfair question, there’s two roads to take.

The other dictates punching an institution with serious trust issues back in the mouth, to call out its credibility when it’s attempting to call out yours as a candidate.

And at least for now, given those options and the precedent that appears to be past being set, the way questions are answered will be changing.

For better? For worse?

Depends who you’re rooting for.