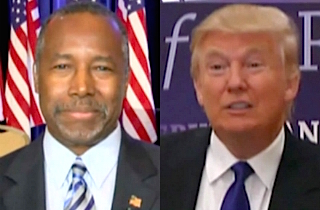 Donald Trump may have reached a new national high point of 30% in the Monmouth University poll released Thursday. But the big news to come out of the new survey is all about Ben Carson.

After tying Trump in Monmouth’s Iowa poll earlier this week, Carson rocketed to second place in the national survey. He is still 22 points behind Trump at 18%, but he is 10 points ahead of his nearest competitors, Jeb Bush and Ted Cruz, who are tied for third at 8%.

Even more intriguing is what happened when Monmouth put Trump in head-to-head contests with the rest of the Republican field. Trump dominated every other candidate besides Carson, who would beat the frontrunner by a whopping 19 points, 55-36% if they were the only two names on the hypothetical ballot.

By contrast, Trump’s lead over Bush was also 19 points, beating him 56-37%. The only other candidate who could come close to beating Trump was Cruz, who still trailed him 48-41%. Trump’s biggest lead of 33 points is over both Chris Christie and John Kasich. See the full breakdown below: 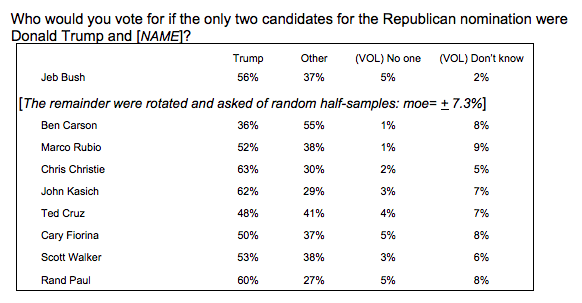 The poll was conducted from August 31-September 2 with a national sample of 1,009 adults and has a margin of error of +/- 5.1 percentage points.

This is all to say that for the time being, Trump may want to spend less time attacking Bush for being close to the Clintons and speaking Spanish and more time going after Carson, as he started to do, perhaps not so coincidentally, today.