Catchy Hip-Hop Track Warns About the Dangers of Ebola
Audio

Catchy Hip-Hop Track Warns About the Dangers of Ebola 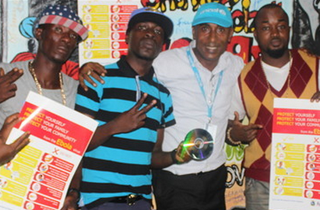 To combat misconceptions about Ebola in West Africa, UNICEF and the Liberian government came up with an incredibly catchy PSA: a Liberian hip-hop track, with some of the country’s hottest talent, called “Ebola Is Real.”

The HipCo song, written to target the 18-and-under demographic (which comprises half of the country), was written in collaboration with the United Nations. The informational lyrics range from the complicated (“The only way you can get Ebola is to get in direct contact with the blood, saliva, urine, stool, sweat, semen of an infected person or infected animal”), to the simple refrain of “Ebola is here/Protect your family/Ebola is here.” (And that beat. That’s a ridiculously catchy beat.)

But despite how popular the song’s become — one health minister said that the song was the most popular in Liberia — it may not be enough to combat the deadly disease, which has effectively shut down Liberia and caused over 600 deaths. As the Atlantic describes the situation:

The obstacles to educating Liberians about Ebola are numerous. This is the first outbreak of the hemorrhagic fever in West Africa. People are bound to fear a poorly understood, often-fatal disease—particularly one where patients, families, and sometimes entire communities are brusquely quarantined and treated by health workers in full-body protective suits. That fear is compounded by deep distrust of Liberian officials stemming from more than a decade of civil war between 1989 and 2003, and the government’s more recent failures to deliver basic services and root out corruption. Some see the country’s anti-Ebola drive as a government conspiracy to secure foreign aid or marginalize certain sectors of society—a view that has produced raids on treatment centers and violent protests in the quarantined slum of West Point in the capital, Monrovia.

[The Atlantic]
[Image via UNICEF]