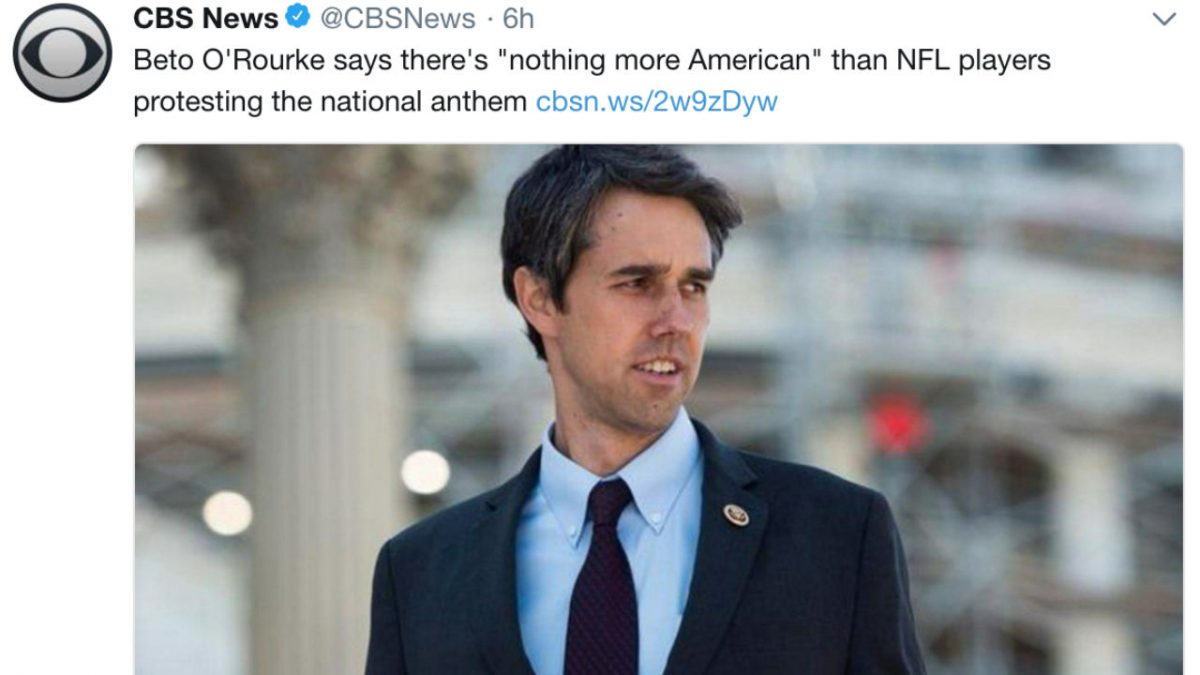 CBS News covered comments from Texas Senate candidate Beto O’Rourke with a headline incorrectly framing the NFL protests he was talking about.

O’Rourke––running against incumbent Ted Cruz––was asked recently about his position on players kneeling during the anthem and not only did he defend them, he said, “I can think of nothing more American than to peacefully stand up or take a knee for your rights anytime, anywhere, any place.”

Cruz responded by saying this won’t fly in Texas:

Beto raising big $$ from Hollywood by supporting NFL protests of the national anthem. But in Texas? Vast majority of Texans stand for the flag, honor our veterans, and support the brave men & women of law enforcement. People can protest without disrespecting the flag. https://t.co/edvin6ButL

CBS News’ report itself refers to O’Rourke defending players “who kneel during the national anthem,” but the headline frames the players’ actions as protesting the anthem:

And the network got quite a bit of critical feedback for that:

NFL PLAYERS ARE *NOT* PROTESTING THE NATIONAL ANTHEM. How many times must it be said? https://t.co/sp7invf35B

This is a disgraceful failure by @CBSNews. No players are “protesting the national anthem.”
They are protesting police use of deadly force on unarmed black men. https://t.co/ufyrXTe0RB

How is this network news? Just the headline has a willful lie in it

This is like running a “King Protests Lincoln Memorial” headline the morning after the “I Have a Dream” speech https://t.co/ketpwTJwrj

THEY ARE NOT PROTESTING THE NATIONAL ANTHEM. They are protesting police brutality. Please fix the tweet @cbsnews. And friends, please share this so they hear from all of us. https://t.co/haMsksfQqG

I’m trying to figure out how you got this wrong @CBSNews, when @BetoORourke says IN THE VIDEO YOU ARE DISCUSSING that the protests are NOT about the anthem. Unless, of course, you’re intentionally misleading folks because you have an agenda. Or your journalism sucks. Which is it? https://t.co/l8xWOgXrQh

After the online blowback this morning, the headline on the CBS News article was changed to say “Beto O’Rourke says ‘nothing more American’ than to stand up or take a knee for your rights.”