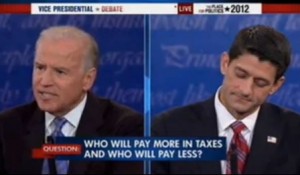 As the mainstream media spends Friday morning fretting over Vice President Joe Biden‘s smiles and laughs, completely ignores the substance of last night’s vice-presidential debate, and declares everybody the winner, a CBS News poll of uncommitted voters gives the victory to Team Obama by a wide margin, with 50% saying Joe Biden won, versus 31% for Rep. Paul Ryan, and 19% calling the debate a tie. More importantly, but less spectacularly, those uncommitted voters went from favoring Mitt Romney by five points before the debate to favoring the Republican ticket by just one point after.

On the substance, the Vice President was the clear winner, revealing the emptiness of the Ryan/Romney ticket’s foreign policy arguments and their extreme position on women’s reproductive rights, and firing the last nail into Paul Ryan’s Math Coffin. The morning media, true to form, wants this to be a dead heat, so they have been pimping a CNN/ORC poll of debate watchers that gave a close victory to Ryan, 48% to Biden’s 44%. There’s no reason to doubt that result, and it will loom large as a narrative-setter, but the CBS poll of uncommitted voters better answers the important question of whether this debate moved the needle with the tiny sliver of voters who are still not sure.

The answer is mixed, but positive for Team Obama overall. That 19-point victory makes for a good headline, although not as good, apparently, as the CNN “it’s neck-and-neck” poll. The internal numbers show that these “uncommitted voters” are a pliable lot, as both candidates saw marked improvements in voter impressions of them, compared to a pre-debate survey, on such questions as “shares your positions on issues” and “cares about your needs and problems.” While Vice President Biden held large leads on Ryan in those internal categories, Rep. Paul Ryan saw much steeper gains in them from his pre-debate levels.

There’s a good chance that Joe Biden’s performance will experience some gains at the watercooler in the next few days, as some of the debate’s substance sinks in, but the media narrative already seems set in stone, so much of that will depend on whether voters get to see clips of Paul Ryan laying down a marker on women’s reproductive freedom, or montages of Joe Biden smiling and laughing. The polls that come out today and early next week, after a full week of September’s jobs report, will be much more important indicators than this debate. If the numbers in swing state polls continue to tighten, this will matter very little, and if te President reopens his lead, this will help, but not much.