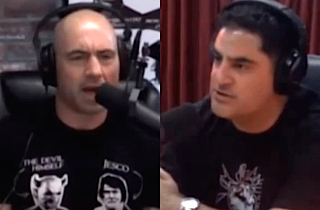 The Young Turks host Cenk Uygur appeared on comedian Joe Rogan’s popular podcast this week, and during their discussion, they took some time to break down just what went wrong when Fox News’ Sean Hannity decided to embrace, and then reject, Nevada rancher Cliven Bundy.

Rogan began by saying how “disturbed” he was by Hannity’s “consolidated ignorance” when it came to “this fucking asshole” Bundy, who was made into a hero by the right until it was revealed that he held some deep-seated racist views.

“They saw this Bundy character as sort of this poster guy for an America that’s fed up with the intrusion of the federal government into our lives and the socialist Obama network,” Rogan said, “and Hannity jumps on board with this, and now he just looks like a complete fucking idiot when more and more information comes out about this guy.”

“Imagine if the situation was reversed and they decided they’re not going to pay their taxes in Compton?” Uygur said, echoing a hypothesis proposed by MSNBC’s Chris Hayes earlier. “Then they’re like, if the government comes here to collect their taxes, fees – whatever – all the black folks in Compton are grabbing their guns, and then they’re going to point them at the federal government and make them back down. What do you think Hannity’s reaction to that would have been?”

Rogan suggested that the Bundy story may have been too “complicated” for someone like Hannity to understand. “You can’t describe it in five minutes and you can’t break it down to a guy like Sean Hannity that has, like, a billion other fucking things on his mind,” Rogan said. “He just sees it as a category — oh, it’s on the right, right support white people, they don’t want Obama, we got a black president, fuck yeah, run with it.”

Uygur agreed, telling Rogan, “One of my big surprises when I got into the talk show world was how stupid Sean Hannity is.”

Watch video below, via The Joe Rogan Experience: