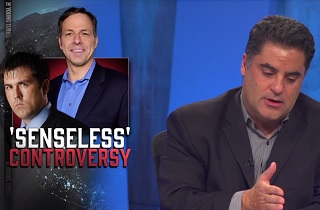 CNN’s Jake Tapper recently weathered a blizzard of criticism from conservatives over an exchange with former U.S. Navy SEAL Marcus Luttrell, who is portrayed by Mark Wahlberg in the new film Lone Survivor, in which Luttrell falsely accused Tapper of implying that his brothers-in-arms “died for nothing.” On Monday’s edition of The Young Turks, host Cenk Uygur defended Tapper, telling Lutrell “Yes, those deaths were totally senseless,” and that “If people like Jake Tapper had been listened to… your friends would still be alive.”

Tapper faced the wrath of countless Twitter trolls and Glenn Beck over the encounter, in which he discussed the film with Luttrell, and said that he was “torn about the message of the film, in the same way that I think I am about the war in Afghanistan itself. I don’t want any more senseless American death.”

The two got into an uncomfortable exchange over whether Tapper said that Luttrell’s fellow SEALs “died for nothing,” which Tapper did not say.

Uygur played the exchange, and said that while Tapper could “speak for himself,” he wanted to be “very clear about what I intend: Yes, those deaths were totally senseless.”

He added “There was no reason that we should’ve been in Afghanistan at that point, let alone today. There was a reason to go into Afghanistan in the first place, but twelve, thirteen years later, there’s no sense in it.”

“It’s not dishonoring them, we’re criticizing the people that sent them in to die, and to get killed, for no reason!” he continued. “That’s senseless!”

Cenk also said Luttrell is “good friends with Glenn Beck,” and perhaps had been playing “Gotcha!” with Tapper. “Well, if Jake Tapper was right ahead of this mess, and somebody had listened to him – and that’s not hos role – but if people like Jake Tapper had been listened to, well your friends wouldn’t have died. They’d be alive today. What did you fight for, a democratic Afghanistan? Which we’re now leaving, with an incredible corrupt government? We drove al Qaeda out fairly quickly on, and the rest was a waste!”