Charlie Crist - Meet the Press - Vote for a Democrat
video 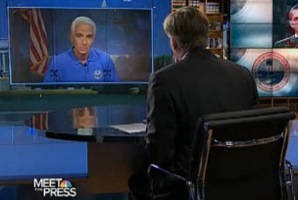 At the White House Correspondents’ Dinner, President Obama quipped about White House party crashers, the Salahis, “there haven’t been people more unwelcome at a party since Charlie Crist!” Well, judging by Crist’s comments to Meet the Press host David Gregory, the feeling may be mutual.

Some background: last Friday, Crist announced the launch of his campaign for US Senate as an independent, ceding the Republican mantle to his opponent, Tea Party favorite Marco Rubio. Rubio’s supporters have since portrayed Crist as someone who is not to be believed, particularly since he had previously pledged NOT to run as an independent.

Well Crist is not only running against a Republican candidate, he has also left the door open to support and vote for a Democratic candidate. Crist’s opponents will surely portray this as a sign of desperation, his supporters will likely play this as a sign of bipartisanship – the new “purple” politics in which he no longer is following the strict and inflexible doctrines of “red states” or “blue states.” The full interview clip is below, but the most relevant part of the transcript is as follows:

GREGORY: “Would you vote for a Republican or a Democratic Majority Leader?”