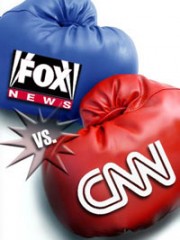 In a show of cable news’ tight relationship with news consumers, CNN and Fox News dominated a recent 60 Minutes/Vanity Fair poll when it came to the “most trustworthy source of daily news.”

The CBS News/Vanity Fair poll asked respondents to name their “most trustworthy” source, from a list of Fox News, CNN, “other major broadcast networks,” New York Times, Wall Street Journal and The Daily Show. Overall, the cable news networks came away with a whooping 61% of the vote – CNN had 32% and FNC with 29%. The entire rest of the broadcast TV community came in 3rd, with 13% and the NYT had just 8%.

There was a breakdown between Republicans and Democrats too, and while CNN dominated among Dems and FNC among the GOP, CNN got more than 20% of the Republican “vote” while more than 10% of the Democrats polled picked Fox News as most trusted.

The numbers are staggering, and continue to prove that cable news has a relationship with viewers that is more comfortable and trusting than the other forms of news dissemination. For CNN, the title of “most trusted name in news” continues to bear out, even as ratings fall. For FNC, the close 2nd should be a point of pride for its journalistic bonafides, especially considering the right/left breakdown.

While MSNBC wasn’t specifically listed in the poll (they could have been grouped with NBC for the broadcast networks, but really they should have been separated out), MSNBC’s Presidents Phil Griffin had his own praise for his competitor network, Fox News. In an interview with the Chicago Tribune‘s Phil Rosenthal, Griffin had this to say about Ailes and his first-place network:

“He’s changed media. Everybody does news differently because Roger’s changed the world,” Griffin said over coffee on a visit to Chicago the other day. He was taking a break from making a case for his own cable network to ad buyers here to make the case for changes in the media landscape to a reporter. “Roger early on figured it out and was brilliant.”

Griffin didn’t hold back about his former network, CNN, either. “The media universe has exploded, and it’s a different world,” said Griffin of CNN’s former dominance. “I don’t go along with this idea that CNN has, that somehow they are doing the Lord’s work and we are simply regurgitating what people think.”

Both the poll and Griffin’s comments highlight something we already know – the three cable news networks are more divided than ever.