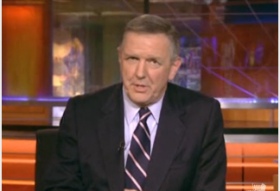 Friday was now-former ABC World News anchor Charlie Gibson‘s last day as anchor, and his sign-off was pretty pitch-perfect, with just the right combination of journalistic gravitas (“Objectivity is not universally in favor in our business these days, but it is critically important. It is what we strive for each night”) and clearly-felt sentiment (“It has been a privilege and an honor to be here working with reporters, producers and staff for whom I have unbounded respect”). Gibson, as per usual, kept it calm and steady, though hearing him talk about it being hard to leave and then realizing just how long he’d been with ABC (“the past third of a century,” as he put it) gave it an extra dimension behind his newsman’s poker face. It was a succinct but warm sign-off, as befits an occupant of a network anchor chair.

The full tribute is below: