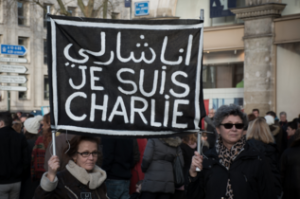 Charlie Hebdo released an English-language editorial this weekend to detail the publication’s thoughts on the recent terror attacks in Brussels. Given that it was only a little over a year ago since their offices were attacked in a similar terror plot and only a few months since the city from which the magazine is published was attacked again, their take on the attacks is especially noteworthy.

To some, it was also especially offensive.

Charlie Hebdo slander Islam again but now there is no more nuance or satire. Their stance is made dangerously clear. https://t.co/xWnTcm3f7K

The editorial called attacks rooted in Islamic extremism “the tip of the iceberg” that is Islam. It profiled hypothetical Muslims in any given society, including a friendly baker whose food is so delicious that patrons of his shop don’t mind that there is no ham in it and the average women whose burquas mean nothing to fellow commuters. Then, it very clearly stated that they, too, contribute to terrorism by existing in a society that is encouraged not to engage in debate or discourse. People who are not Muslim, according to the editorial, are told that anything they say or do to question the religion will be seen as Islamophobic, so no one speaks up about wanting ham at the bakery or anything else.

The publication went on to suggest that Muslims question, “How the hell did I get here?” when wearing head coverings or praying five times a day, just as non-Muslims ask that question in the wake of a terror attack.

It’s nice to see Charlie Hebdo confirm, in words, how narcissistic, reactionary, and incoherent their politics are: https://t.co/5qaCWHg8Bq

Of course, not everyone was upset about the publication’s choice to distribute blame and write the editorial. (Though most news outlets are reporting that people are outraged and a search on Twitter reveals that the amount of anger is staggering compared to the amount of applause.)

#CharlieHebdo Thank goodness the French have the confidence to defend freedom, liberty and feminism. Thank you Charlie Hebdo.

Others were hesitant to criticize the magazine because of what happened to them at the hands of terrorists.

I obviously have never liked Charlie Hebdo but feels very uncomfortable to excoriate them after what happened last year. Best to ignore.

Finally, here is how the piece ended:

The first task of the guilty is to blame the innocent. It’s an almost perfect inversion of culpability. From the bakery that forbids you to eat what you like, to the woman who forbids you to admit that you are troubled by her veil, we are submerged in guilt for permitting ourselves such thoughts. And that is where and when fear has started its sapping, undermining work. And the way is marked for all that will follow.

So, what do you think? Was Charlie Hebdo right or wrong here?