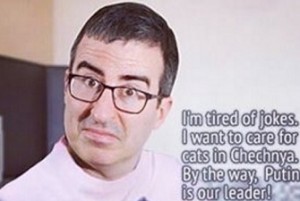 A media spat has developed that could be a taste of things to come depending on how our own presidential election turns out. On Sunday’s edition of HBO’s Last Week Tonight, host John Oliver did an extended bit slamming Republic of Chechnya Head Ramzan Kadyrov over human rights abuses and an eccentric love of Vladimir Putin that culminated in a social media prank at Kadyrov’s expense. On Monday, Kadyrov hit back at Oliver via Instagram and Google Translate.

It all began with Sunday night’s segment on Kadyrov, which mocked the Chechen leader for, among other things, his fondness for Putin t-shirts, his habit of overreacting when he loses things, and the actual cat he lost. The bit ended with Oliver instructing his audience to jam Kadyrov’s timeline with messages about the lost cat, as well as photos of things that might or might not be the cat:

Some of the responses were inspired:

On Monday, Kadyrov responded, in what can loosely be described as English, with an Instagram message and a photoshop of Oliver that essentially said “I know you are, but what am I?”

Recently my “tiger cat” has left the house. It happens in spring from time to time. He also needs to meet with friends, mingle and share news. By cat rumors he has in our district a familiar she-cat with which he’s going to start a family. I’m sure that after spring affairs, the cat will return to native walls. Perhaps, he'll bring his sweet love with him. I got used to share with my friends in Instagram with all news, including cat issues. And this time I didn't want to leave as a secret the cat's adventures. I receive lots of photos. Some people say that they saw the cat in Vladivostok, Japan, Iceland, New Zealand, and even in the Oval Office of the White House! I am grateful to all, but this is NOT my cat. It became known that even the American TV channel “HBO” joined to search. The anchorman comedian – John Oliver asks millions of viewers to look for a cat. I knew long ago that in the USA unevenly breathe to my younger friends. One day horses aren't allowed to jump, the other – a cat is a real star of a show. Oliver laments a fact that we put on t-shirts with a photo of the President of Russia – Vladimir Putin. Yes, millions of people rejoice t-shirts with the image of the national leader. For this purpose, there is a good motivation. Vladimir Vladimirovich is a wise, courageous, resolute Head, who managed to withstand unfriendly campaign, which is conducted by the USA and its assistants. Thanks to Putin, we have crushed terrorists among whom there were also citizens of the USA, and European citizens. The country directed by Obama under the guise of peacekeeping operations spark new wars and bloody internal conflicts, in which die millions of people. Afghanistan, Iraq, Libya, Syria… That's why there is nothing surprising that Oliver also got a wish to appear publicly in a T-shirt with an image of Putin, but not Obama. #Kadyrov #Russia #Chechnya #USA #HBO #Oliver #findkadyrovscat #Ihavenotseenyourcat #IHAVESEENYOURCAT

Knowing Oliver, the prank won’t stop there. Watch this space.