Chicago PD Releases Video of Another Fatal Shooting; No Charges Filed Against Officer 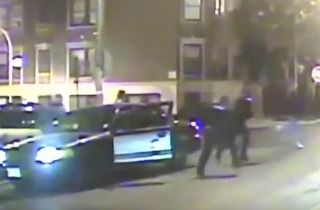 The Chicago Police Department today released a video of another fatal shooting of a young man by a police officer.

In the wake of outrage in Chicago after the release of video showing Laquan McDonald being shot and killed, new dashcam video released today shows officers chasing Ronald Johnson during an incident back in October 2014.

Johnson, 25, got out of a car and ran away from the officers. He was reportedly running towards where other officers were located, and Officer George Hernandez shot five times. Johnson was hit twice and died. The moment he was struck down was not caught on the dashcam video.

After the video was released today, Cook County State’s Attorney Anita Alvarez announced that no charges would be filed against Hernandez.

According to WaPo, she explained, “Based upon an objective review of the evidence and the law, we have determined that the prosecution could not establish beyond a reasonable doubt that the actions of Officer Hernandez were not reasonable and permissible under the laws of the state of Illinois.”

Authorities reportedly found a pistol on Johnson’s body, and Alvarez also played audio of 911 calls illustrating that the officers who confronted Johnson were responding to reports of gunfire.

There is an investigation into the shooting, despite no charges being filed.

This comes on the heels of the Justice Department announcing an investigation into the Chicago police over McDonald’s death.

You can watch the dashcam video above, via CNN.