Disabled Chicken Gets ,500 Prosthetic Leg and Better Health Coverage Than You

Chicken Gets $2,500 Prosthetic Leg and Better Health Coverage than You 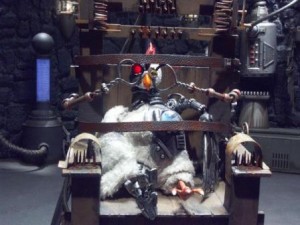 If you were worried all the media hullabaloo about Cecil the Lion and animal rights was about to die down, never fear for Cecily the Chicken is here!

According to the Worcester Telegram & Gazette, the disabled three-month-old poultry came into the care of poultry behaviorist and rehabilitation specialist Andrew Martin in Clinton, Massachusetts. Cecily was born with a bad tendon in her leg, so Martin will pay for a $2,500 prosthetic leg made by the Cummings School of Veterinary Medicine at Tufts University in the town of Grafton.

The school’s own Dr. Emi Knafo, who specializes in avian orthopedics and surgery, will oversee the procedure on Wednesday:

“The foot tendons contract in an abnormal place,” she said. “It puts them at risk for sores and infections, and the choices were euthanasia, or try to manage it with pain medication. It could be an uncomfortable life. But as a veterinarian, we always try to evaluate and intervene in a positive way.”

“People would not think twice about it (the procedure) for another kind of animal,” Dr. Knafo said. “We want to give her as much of a pain-free life as possible.”

As weird as this might seem, similar procedures were recently done successfully for a rooster and a duck at other veterinary schools.

As For Martin, spending so much time and money on a single chicken isn’t anything new for her:

Cecily’s rescue and paying for the upcoming procedure is not out of the ordinary for her.

She financed a hysterectomy for another of her chickens, named Emily.

“They don’t take the ovaries, so she still lays eggs,” Ms. Martin said.

Might as well start the clock on the “When will someone turn this viral story into a new debate point about Obamacare?” count down.