Chief Justice John Roberts: ‘I Think It’s Only Fair To Treat You The Same’

Chief Justice John Roberts: ‘I Think It’s Only Fair To Treat You The Same’ 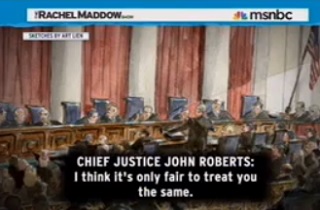 During the Supreme Court’s oral arguments Tuesday, eight of the nine justices asked questions that are being pored over by the media, in search of some clue as to how the Court will rule on California’s Proposition 8, which banned same-sex marriage in the state. Along the way, Chief Justice John Roberts summed up what that case should be about, and indeed, what the entire marriage equality debate is about, when he said “I think it’s only fair to treat you the same.”

What’s fascinating about that is the ease with which Roberts was able to apply that concept in one context, but not in an arguably weightier one. That quote, which would seem to be good news for proponents of marriage equality, was actually a casual admonition for the lawyers arguing the case to respect his authoritah. Here’s the exchange, as aired on Tuesday night’s The Rachel Maddow Show:

It’s only fair to treat you the same. That quote rang in my ears as I read the transcript from yesterday’s oral arguments, because the justices who granted that equality to the lawyers arguing the case consistently failed to extend the same to the parties most affected by the case. While that theme ran throughout the oral arguments, there were a few instances that were glaring.

At one point, Chief Justice Roberts distilled the case down to a fight over the “label” of marriage, telling attorney Ted Olson that “if you tell a child that somebody has to be their friend, I suppose you can force the child to say, this is my friend, but it changes the definition of what it means to be a friend. And that’s it seems to me what the — what supporters of Proposition 8 are saying here. You’re -­ all you’re interested in is the label and you insist on changing the definition of the label.”

The theory, then, is that marriage equality boils down to gays obsessing over a meaningless “label,” the denial of which causes no substantial harm, and the granting of which would wreak havoc with the dictionary (alas, that ship has sailed).

Olson’s response was capable and persuasive. “It is like you were to say you can vote, you can travel, but you may not be a citizen,” he said. “There are certain labels in this country that are very, very critical. You could have said in the Loving case, what — you can’t get married, but you can have an interracial union. Everyone would know that that was wrong, that the — marriage has a status, recognition, support…”

What he should have asked Roberts is, if this is all just a fight over a meaningless label, why have the government recognize any marriages? If everything else about these unions is the same, why would straight people object to the government putting everyone on equal footing, and ruling that every such relationship is a civil union? It’s only fair to treat you the same, but such a ruling would rightly be seen as taking something away from opposite-marrieds.

In the next part of that exchange, Roberts returns to the much-derided fulcrum of the pro-discrimination side, the government’s “interest in regulating procreation.”

“How do we know that that’s the reason, or a necessary part of the reason, that we’ve recognized marriage as a fundamental right?” Roberts said. “That’s — you’ve emphasized that and you’ve said, well, it’s because of the emotional commitment. Maybe it is the procreative aspect that makes it a fundamental right.”

What Roberts is saying is that it is not the label of marriage that makes it a fundamental right, the status, recognition, and support, but rather, the state’s interest in encouraging procreation. It’s a ridiculous notion that was famously torpedoed by Justice Elena Kagan earlier in the hearing when she asked Prop 8 defense lawyer Charles Cooper why we don’t also ban older people from getting married.

However, even if you set aside the many flaws in Cooper’s premise, and Roberts’, the argument fails on its own merits, and takes down the “labels” argument with it. Earlier in the hearing, Justice Kagan summed up the Prop 8 argument by saying “same-sex and opposite — opposite-sex couples are not similarly situated because opposite-sex couples can procreate, same-sex couples cannot, and the State’s principal interest in marriage is in regulating procreation. Is that basically correct?”

Cooper, caught up in all the procreation talk, responded, “Your Honor, that’s the essential thrust of our — our position, yes.”

But Cooper later expanded that interest to conveniently include opposite-marrieds who might not be able to make their own babies. “(S)ociety’s interest in responsible procreation isn’t just with respect to the procreative capacities of the couple itself,” he said. “The marital norm, which imposes the obligations of fidelity and monogamy, Your Honor, advances the interests in responsible procreation by making it more likely that neither party, including the fertile party to that…” He was cut off in favor of a long tangent by Justice Scalia, but finished the thought later. “will engage in irresponsible procreative conduct outside of that marriage.”

So, marriage isn’t just about two people making babies, it’s about keeping two people together by making them promise not to screw around. For example, it prevents fertile dude, married to infertile wife, from abandoning their adoptive/surrogate-born/whatever children by making a baby with some other woman who isn’t infertile. That makes sense, if you buy into the state’s interest argument. However, it ignores the fact that same-sex couples are equally capable of such unions, and far less likely to stray into an accidentally procreative relationship. A man isn’t likely to cheat with another man, only to find out he accidentally impregnated his lover’s surrogate. If “procreative capability” isn’t the issue, same-sex marriages would seem to serve the state’s interest better than opposite marriages.

It stands to reason, then, that a no-parent home is harmful to that stated interest, and gay couples are uniquely positioned to remedy that harm. The adoption of children into loving two-parent homes which are virtually impervious to “irresponsible procreative conduct” seems to serve the state’s supposed interest in marriage very well.

That brings us back to Justice Roberts’ “labels.” Justice Kennedy asked Cooper about the children of gay parents. “There are some 40,000 children in California, according to the Red Brief, that live with same-sex parents, and they want their parents to have full recognition and full status,” Kennedy said. “The voice of those children is important in this case, don’t you think?”

Here is Cooper’s response (emphasis mine):

In fact, their expert agreed there is no data, no study, even, that would examine whether or not there is any incremental beneficial effect from marriage over and above the domestic partnership laws that were enacted by the State of California to recognize, support, and honor same-sex relationships and their families. There is simply no data at all that would permit one to draw — draw that conclusion.

What he’s saying is that, despite arguing that the main interest marriage serves is the raising of children, there is no evidence that calling it a “marriage” has any benefit. At the same time, though, he’s conceding that legal gay domestic partnerships serve the same state interest, the promise of fidelity, the obligation of monogamy, the lack of irresponsible procreative activity, as the “marital norm.”

The answer is simple. This question has nothing to do with procreation and dictionaries and some omnipotent cultural Brother P-Touch. It has to do with the principle that Chief Justice Roberts could only recognize when some lawyers tried to wiggle around his instructions: “I think it’s only fair to treat you the same.”