Chipotle Worker Who Made Silly Face Next To Romney: I Make That Face ‘When I’m Excited’ 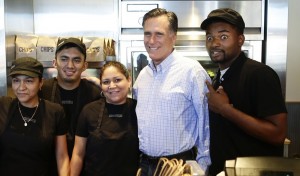 Everyone has a different way of demonstrating excitement, and 20-year-old Chipotle Grill manager Marty Arps, whose claim to fame was making a silly face next to GOP presidential candidate Mitt Romney on Tuesday, says he shows his thrill through odd expressions.

“It’s a facial expression I do when I’m excited,” Arps told The Daily hours after the picture was snapped and had made the rounds on the Internet. “There was nothing political. He was just a customer.”

Romney isn’t the only public figure Arps has had such a reaction to. The same thing happened when he encountered rapper Nicki Minaj:

Given the startling manner in which the presidential candidate showed up to Chipotle, it’s no wonder that the young man was visibly affected by the experience. Seemingly out of nowhere, a motorcade of cops, flood of Secret Service agents, and string of reporters arrived at the restaurant yesterday morning.

“All of a sudden you see these black SUVs come up really quick and I thought we were about to get robbed.”

The exact opposite happened. Romney had an $18.25 dollar tab and handed over a twenty, letting the Chipotle employees keep the change. The meeting and snapshot may not gain Romney a vote from Arps though, as the Denver worker says he remains undecided on who he’ll support in the election.