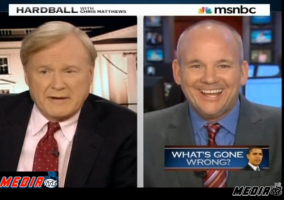 On yesterday’s Hardball, Chris Matthews got testy over the suggestion that President Barack Obama is having trouble with the left. When New York Magazine political correspondent John Heilemann suggested that the Democratic base was wavering about Obama over concerns that he had “sold out to conservatives” and was “too mushy and too centrist,” Matthews swatted back, saying that the netroots “get their giggles out of sitting in the back seat and bitching:”

HEILEMANN: Chris, have the last two days made you think that, when you hear the Democratic left trashing the health care bill and attacking the president?
MATTHEWS: Well, I don`t consider them Democrats. I consider them netroots. And they`re different.
HEILEMANN: Ah.
MATTHEWS: And if I see that — if I see that they vote in every election or most elections, I will be worried. But I`m not sure they`re regular grown-up Democrats.
I think a lot of those people are troublemakers who love to sit in the back seat and complain. They`re not interested in governing this country. They never ran for office. They`re not interested in working for somebody in public office. They get their giggles out of sitting in the back seat and bitching. Excuse me. That`s a verb.

Surely his colleague Keith Olbermann, who said that he would go to jail if he had to buy government health care under the current reform bill and occasionally blogs at Daily Kos, would agree.