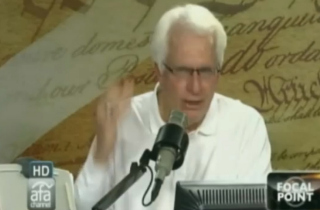 Christian radio host Bryan Fischer took to his American Family Association radio show this afternoon to say that God didn’t stop the horrific Connecticut elementary school shooting spree because he does not go “where he is not wanted.”

Fischer made the case that, in his mind, God would have protected the shooting victims had there been a system of school prayer and a respect for the Ten Commandments in public classrooms.

“Where was God when all of this went down?” Fischer began. “Here’s the bottom line: God is not going to go where he is not wanted.”

And so, Fischer said, “God would be glad to say to us, ‘Hey, I’d be glad to protect your children, but you’ve got to invite me back into your world first. I’m not going to go where I’m not wanted. I am a gentleman.'”

The evangelical host then reminisced about his school days, noting that “back when we had prayer — the Bible and the Ten Commandments — in schools, we didn’t need guns.”

Fischer ultimately concluded that the solution to violent incidents today is not restrictions on the Second Amendment, but rather the reinstitution of school prayer to ask God for protection on a daily basis.

Watch below in video clipped by Right Wing Watch: