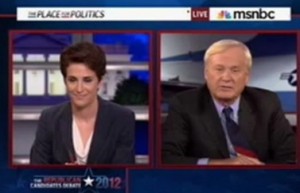 Matthews did, indeed, mention Bible Belt voters and “minimal IQ levels,” but a review of the clip in question suggests O’Donnell’s anger might be misplaced.

In discussing Gov. Rick Perry‘s appeal to Republican primary voters, as opposed to Mitt Romney, Matthews drew a distinction between hardline conservatives, and more moderate Republicans. “With the baptists in South Carolina and across the Bible Belt that doesn’t like Mormons, all you have to do in this race is reach a minimal level of IQ to be okay to run against a Mormon in the deep South.” Matthews said.

“Just be good enough. and I think he did that tonight. He was good enough. He didn’t make a fool of himself, and that’s all they want.”

If I’m hearing this right, Matthews isn’t saying that Bible Belt voters have low IQs, but rather, that they have a lower bar for a candidate to meet when running against a Mormon. In other words, they’re not stupid, they’re just religious bigots who would rather vote for a relative dummy than a Mormon. While there is polling to suggest that being a Mormon isn’t necessarily a political asset, there’s no data to suggest the phenomenon is restricted to the Bible Belt.