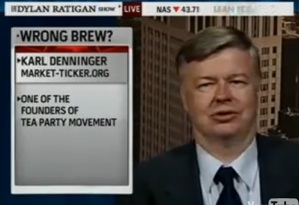 It’s impossible to lay the honor of creating the Tea Party movement at the feet of just one person, but there were a few seminal figures who help start the movement back in January of 2009. One such “founder” is Karl Denninger, who used his website Market-Ticker.org to promote the very first Tea Party event. Ironically, he’s now using the same means to call out the very movement he started. In a post titled “To The Tea Party: Go Screw Yourself” Denniger rails on those he feels have co-opted the Tea Party moniker, specifically calling out “Sarah Palin, Newt Gingrich, Bob Barr, and douchebag groups such as the “Tea Party Patriots.”

First a bit of background: In the wake of the 2008 government bailout of Bear Stearns, former CEO and founder of Market-Ticker, Karl Denninger formed a group called FedUpUSA, a “one-stop source for all the up-to-the-minute news regarding the global financial crisis.” Later, he published a post entitled “Tea Party February 1st?” to promote a grass-roots protest of government fraud and what he has called “rampant theft of over taxpayer money propping up FAILED private businesses.” So while its true that the Tea Partiers have no one single founder, its fair to say that Denniger was very early in promoting the ideas behind the movement, which makes his very clear attack on the current state of the Tea Party movement so meaningful.

In a pointed critique that spares no targets, Denninger makes his voice clear:

I, and FedUpUSA, ought to sue anyone using this moniker for their so-called “political affiliation” for defamation.

But so are you.

Denninger then proceeds to deconstruct what he sees as the hypocrisy of the mission statement from the “Tea Party Patriots” that claims to “oppose government intervention.” Denninger responds:

Oh, oppose government intervention eh? You mean, you oppose stringing up the people who break the law and steal people’s homes and wealth? Private business is only private up until it rips someone off.

Notice what’s missing from this mission statement and principles: Any mention of why I and others led people to mail tea bags to Congress and our President in the first place: rampant theft of over taxpayer money propping up FAILED private businesses.

The entire post is a fascinating and reasonably well-constructed take down of how the Tea Party movement has been co-opted by conservatives and the GOP alike, by someone who really doesn’t like where the anti-government movement has been taken by what he sees as well-funded and bureaucratic wolves in sheep’s clothing.

In the past year, there has been a coordinated effort to align the GOP’s efforts with the Tea Party movement, and the conservative base has quite successfully harnessed the anger and passion that originally fueled the Tea Party Movement. While It’s nearly almost impossible to define the numerous groups that come under the broader “Tea Party” rubric; within the broader grass-roots movement, there is a broad spectrum of beliefs on social, cultural and political issues, built on common theme that, as a country, we need to “throw the bums out.” But for some original Tea Partiers (Denninger for one) there seem to be just as many Republican “bums” that need throwing out as there are Democrats.

Denninger’s post is oddly reminiscent of an interview that former Reagan Budget Director David Stockman gave to NPR’s Weekend Edition in which the practical father of “supply-side” economics was remarkably critical of the GOP. And while Stockman never specifically mentioned the Tea Party movement, his core frustrations with the the political landscape echoed many of the frustrations outlined in Denninger’s piece as well.

Denninger appeared on Dylan Ratigan‘s show on MSNBC yesterday where he made many of the same points he made in his blog post. Watch the video of his appearance below.