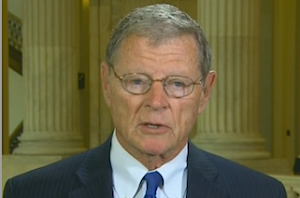 If you thought the Republicans taking over the Senate would not have any tangible impact on business as usual in Washington, consider this: Senator James Inhofe (R-OK), author of the book The Greatest Hoax: How the Global Warming Conspiracy Threatens Your Future

, is most likely going to become chairman of Environment and Public Works Committee.

The Washington Post is reporting that Inhofe is on track to replace Sen. Barbara Boxer (D-CA) as head of the committee that deals with issues like regulating pollution and carbon emissions. Aside from believing man-made climate change is a “hoax,” Inhofe has also written that “global warming alarmists are set to destroy hundreds of thousands of jobs and significantly raise energy prices for families, businesses and farmers, basically anyone who drives a car, uses heavy machinery, or flips a switch.”

And then there was that time he suggested that a warming climate might actually benefit humans:

“It’s also important to question whether global warming is even a problem for human existence. Thus far no one has seriously demonstrated any scientific proof that increased global temperatures would lead to the catastrophes predicted by alarmists. In fact, it appears that just the opposite is true: that increases in global temperatures may have a beneficial effect on how we live our lives.”

Nearly 10 years, Inhofe was using Bible scripture to justify his refusal to believe the near-total scientific consensus on the issue:

“[T]he Genesis 8:22 that I use in there is that ‘as long as the earth remains there will be seed time and harvest, cold and heat, winter and summer, day and night.’ My point is, God’s still up there. The arrogance of people to think that we, human beings, would be able to change what He is doing in the climate is to me outrageous.”

Perhaps even more telling is the way Inhofe responded to the devastating tornado that ravaged his home state last spring. While some on the left raised the possibility that stronger tornadoes might be connected to a warming climate, Inhofe blasted the “liberal media” for “trying to exploit a tragedy to advance and expand its own agenda.”

“We were being hit by tornadoes long before anyone talked about climate change,” Inhofe said at the time, “and even before it was called ‘global cooling,’ before it became ‘global warming,’ and then ‘climate change.’ The same thing that happened last week happened 14 years ago, 25 years ago, and 30 years ago.”