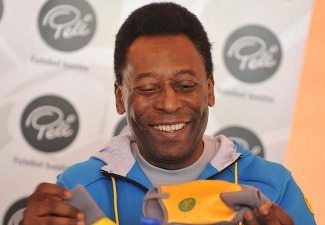 The legendary footballer Pelé is very much alive and well (and scheduled to be a guest on The Daily Show next week), but this morning CNN reported that he passed away today at the age of 73. This, however, turned out to be false and CNN had to quickly retract the report.

CNN morning show New Day sent out a tweet this morning reading “#BREAKING: Brazilian former soccer player Pele dies at 74.” The death report appears to have just been a rumor and nothing more, and after reporting it CNN quickly retracted it.

Here’s the tweet in question, captured by Circa editor-in-chief Anthony De Rosa.

CNN removed the tweet and sent out a bunch of tweets apologizing for the error.

#Pele representative tells CNN he is alive and very well.

We deleted an earlier and erroneous tweet on this topic. We regret the error and thank our followers for the feedback.

An erroneous tweet about former Brazilian soccer player Pele has now been deleted by @Newday. Apologies to Pele & our followers.

CNN’s @ShastaCNN in Sao Paulo has spoken to #Pele’s representative who says he is alive and very well. People need to stop making up lies

@AntDeRosa @ShastaCNN Get your facts right! In my tweet I say clearly in Portuguese that twitter is reporting Pele is dead. true/not?