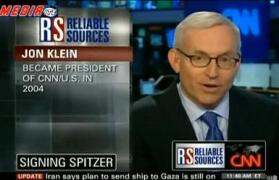 Larry King is moving on.

The CNN host announced last night he’s ending his 25-year show in the fall. His boss, CNN/U.S. President Jon Klein told Mediaite “to be able to pull together and get out on air in a classy, optimistic way, blew me away.” We talked to Klein about what happens next for King (and Anderson Cooper, and John King), the new Spitzer/Parker show and more.

Mediaite: In your statement last night you said “Larry is a beloved member of the CNN family and he will continue to contribute to our air with periodic specials.” Can you describe what King means to CNN but also, what you expect his new role to look like?

Klein: Larry has meaning of course to CNN but really the entire TV industry. Larry lured tens of millions of Americans over to cable. There really wasn’t a compelling reason to watch those weird channels until Larry came along. That’s his place in media history. That of course helped put CNN on the map. Ted Turner says news is the star, but in fact Larry King was the star. He will continue doing specials, and his mind is racing with possibilities. At lunch yesterday it was so much fun to see him brainstorming, blue-skying about the next phase. So with the announcement behind him, he and Wendy Walker will focus on developing specials, thinking about what the scope will be, what the style will be. They’ve got a lot of initial thoughts to really wrap their arms around in the coming months.

Mediaite: Last night Keith Olbermann tweeted: “Larry King is a lovely, generous man who tried, for eight years, to convince his bosses to hire me to be his 8 PM lead-in at CNN.” Is this true?

Mediaite: But is it true?

Klein: Larry’s got a million ideas a day.

“To suggest all our marbles are in one particular show, one schedule, one lineup is not the way the world works especially in a 24-hour news operation.”

Mediaite: It feels like when fall comes, with Eliot Spitzer and Kathleen Parker’s new show and whatever is put at 9pm, this will be a majorly revamped prime time. Do you have the feeling this is do or die, in the sense the stakes are particularly high?

Klein: Have you noticed every fall, every network has a new lineup? Is it ever do or die? Of course not. It’s an ongoing evolution process, and we have high expectations of all these new initiatives we’re planning. To suggest all our marbles are in one particular show, one schedule, one lineup is not the way the world works especially in a 24-hour news operation where we’re judged minute by minute on how well we’re covering what’s going on in the world.

Mediaite: If, and I know it’s a big if, Piers Morgan is named host of the 9pm hour on CNN, it would mean all the leaks and speculation, Spitzer/Parker and now Morgan, was correct. Does that concern you, that there are leaks coming out of CNN regarding these major staffing decisions?

Klein: It’s such a big “if” it’s not worth talking about.

Mediaite: But the leaks about Spitzer and Parker turned out to be true.

Klein: It’s a big organization with a lot of moving parts. People can speculate away. Usually the people who don’t know are who are doing the speculating. It’s a reflection on the place CNN holds in pop culture. A lot of people care what we’re doing.

NEXT PAGE: Will Anderson Cooper’s 10pmET show stay the same, the value of patience.