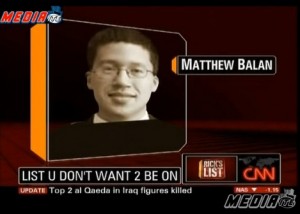 CNN anchor Rick Sanchez took some criticism from conservative media watchdog Newsbusters last week, but he didn’t take it lying down. Newsbusters’ Matt Balan slammed Sanchez for a segment in which he joked that he thought it was too cold for a volcano to erupt in Iceland. Balan apparently didn’t get that Sanchez was joking.

Sanchez responded by putting Balan on his “List U Don’t Want 2 B on,” but what’s comical is Rick’s Zapruder-like deconstruction of the segment, along with his expectation that Newsbusters would call to find out if he’s joking. Ironically, he spent 4 minutes promoting a blog post that was likely only being read by people who already don’t watch his show.

Balan responded to Sanchez’ rebuttal on Newsbusters, and it looks like this might be the start of a beautiful friendship:

Sanchez did give me the last word, in a sense, when he talked about my initial response to his “List U Don’t Want 2 Be On” segment: “By the way, I just told you a story a little while ago about this fellow, Balan- Matthew Balan, and we follow Tweets from everyone who is relevant to the news that we tell, so here we go. We just received a Tweet from Matthew Balan, and he says, ‘Well, thank you, ricksanchezcnn, for at least calling me a ‘nice enough fellow.'” He was. My conversation with him today on the phone was quite nice, and he did come across as a nice guy. It happens.”