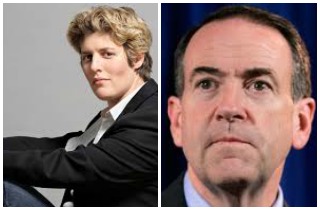 While virtually every columnist and commentator on the left has already parsed Fox News host and former Arkansas Gov. Mike Huckabee’s comments from last week in each possible way – divining any and every manner in which one can discover that they were offended – there was one element of Huckabee’s statement that most overlooked: the blatant racism. While some might assume that the racism in Huckabee’s statement was overlooked because it does not exist, a competent columnist only needs to perform elementary logical acrobatics in order to demonstrate that this assumption is unfounded.

Stepping up the plate is CNN contributor and The Daily Beast columnist Sally Kohn who broke out the old decoder ring, largely gathering dust since the 2012 presidential election cycle, in order to unearth the “racialized” aspect of Huckabee’s comments about how the Democratic Party views women as a class of feeble dependents.

“Perhaps it’s time for Republican men to stop talking about women’s bodies and choices,” Kohn advised the GOP. This, to Republicans, sounds like Democrats advising Republicans to give up on talking about a key aspect of their central 2014 gripe: the Affordable Care Act. From a purely ideological perspective, conservatives are as unlikely to “stop talking” about taxpayer-funded contraception mandates, some of which are so onerous that they may even be struck down by the United States Supreme Court, as Democrats are to stop talking about the weather and wealth disparities.

But if feigning outrage over Huckabee’s comments about women is not enough to beg Republicans off touting the benefits of self-reliance and independence, Kohn moves on to attacking Huckabee for flashing this Republican base the secret sign that only they (and Kohn, oddly) can decipher.

RELATED: Huckabee to Megyn Kelly: I Wasn’t ‘Disparaging Women,’ I Was Trashing ‘Phony War on Women’

She notes that Huckabee was not merely talking about the federal government when he said Democrats appear to hope that women become reliant on “Uncle Sugar” for their various publicly-funded benefits. Kohn asserts that Huckabee was specifically referring to President Barack Obama who he was quite aware is also an African-American.

Thus, with Huckabee having been branded with the scarlet “R,” the perfunctory garment-rending over his mildly provocative comments can continue unabated.

Huckabee’s continued flirtation with reentering politics has earned him some deserved rebuke over this incident. He carelessly straddles the line between entertainer and politician and deserves the increased scrutiny that comes with being a political figure. Huckabee has done his political allies no favors with his provocatively-constructed comments, but the reaction to them has been predictably inflated in order to maximize their potential to inflict maximum political damage on the GOP.

However, to date, Huckabee is not a declared candidate. He is an entertainer who is simultaneously promoting his television show, an upcoming online venture, and his own personal brand. He has benefited greatly from the manufactured outrage over his comments to a group of Republican National Committee members.

This episode makes one wonder whether the next inflammatory statement uttered by HBO host Bill Maher will move the media’s prominent political critics to ruminate on the cultural rot that taints the political party he supports. Don’t hold your breath.

Update: Kohn has responded to the controversy her comments ignited by claiming that conservatives have misrepresented her comments:

” It’s telling that rather than try and defend my weighty critique of Republicans vis-a-vis gender politics in America today, conservatives have latched onto—and mischaracterized—this one sentence in my column,” Kohn wrote.

But context is everything, and his remarks fit squarely within the recent history of Republicans accusations that President Obama is the “food stamp president” and just wants to give”free stuff” to his base, including “gifts” to black voters which is how he supposedly won the election. Make no mistake, “Uncle Sugar” echoes these racialized attacks.

“That said, I consciously used the word racialized — to connote how the phrase consciously or unconsciously reflects and reinforces implicit racial bias,” she adds. “I very deliberately did not use, nor would not use, the word racist— which carries infinitely more deliberate and malignant implications. I regret this nuance appears lost on many who are responding to my critique.”

Kohn seems to believe that the concept she was remarking on was too complex for her critics to comprehend. Her words have been reproduced here in full, just as were her original comments. This column, meanwhile, was omitted from Kohn’s addendum.

I do not see the difference between stoking racism and appealing to “racialized” stereotypes. As such, I made no distinction in the above post. This is distinct from being unable to comprehend the “nuance” Kohn says she was highlighting. I suppose failing to interpret nuance is a two-way street.