Cocaine Kingpin to Congress: Please Let Me Keep My Cheetahs!

Cocaine Kingpin to Congress: Please Let Me Keep My Cheetahs! 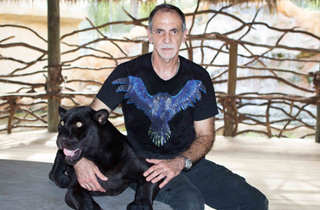 Imagine if Scarface didn’t die at the end of the movie, but was sentenced to decades in federal prison. Imagine that, while he was in prison, he decided to open a for-profit sanctuary for exotic animals in South Florida, and successfully ran it for 15 years. Now imagine that, faced with the prospect of closure, Scarface hired lobbyists on Capitol Hill to prevent Congress from seizing his cheetas and giving them to an accredited zoo.

Yeah, this is an actual story.

Mario Tabraue Sr., a notorious cocaine kingpin from Miami who once used a machete to hack apart the corpse of a federal agent, is also a wild animal lover: Mother Jones reports that his organization, the Zoological Wildlife Foundation, houses “a collection of rare animals, including two-toed sloths, peregrine falcons, a snow leopard, and a citron-crested cockatoo. He even has a liger (a cross between a lion and a tiger).”

But thanks to a bill winding its way through Congress, which “would restrict the acquisition of big cats to accredited zoos and require private owners to register their animals,” Tabraue’s zoo/kingpin menagerie is at risk, and to combat it, he actually paid $80,000 to a DC lobbyist to work against the bill, and joined a coalition of other private animal owners, including Feld Entertainment, the parent company of Ringling Bros. Yes. A cocaine kingpin is joining forces with the circus to save their tigers from the government.

Fun facts about Tabraue: back in his cocaine days, his primary front was an exotic pets import company called “Pets Unlimited,” he once owned the only two-headed python in North America, and he was eventually brought down by Janet Reno. Okay, maybe he’s more unbelievable than Scarface.