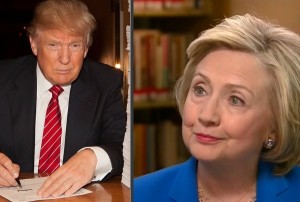 As we reported earlier, The Washington Post is out with a very explosive story that shows Donald Trump‘s old tax returns reveal at least two years in which he paid no federal taxes, but a closer look at the breadcrumbs that led to Friday morning’s revelation shows some suspicious timing, and some suspicious journalism. Taken separately, they’re just things that make you go “hmmm,” but taken together, and with a knowledge of standard journalistic protocol, they make you go “Hmmm!”

On May 11, Hillary Clinton began to press the tax return attack hard, planting the seeds of suspicion about Donald Trump’s tax returns, and pointing out her own disclosures:

My husband and I have released 33 years of tax returns, we’ve got eight years on our website right now. So you have got to ask yourself, why does he not release them? Yeah, well we’re going to find out.

The very next day, The Washington Post‘s Glenn Kessler did a “Fact Checker” column about Trump’s tax returns, which isn’t suspicious by itself. FactCheck.org did a piece the same day, pegged to the same comment by Donald Trump. Kessler’s piece was entitled “Trump’s false claim that ‘there’s nothing to learn’ from his tax returns,” which is a little it weird considering it contained the very same information that’s a huge story more than a week later. That’s actually a lot weird, but not compared to the rest of this. Kessler’s piece also cites the exact disclosure Hillary did in her speech, also not all that weird by itself. Here’s how Kessler reported the big zero taxes scoop more than two weeks ago, in the 23rd paragraph:

Voters would learn whether Trump is taking advantage of certain tax shelters. Any overseas assets must be reported, so voters would also learn how much Trump has invested out of the country.  Trump’s tax returns,examined by the New Jersey Casino Commission in 1981, show he paid no income tax in 1978 and 1979 as he reported negative income, likely because of tax shelters.

If burying a huge scoop in the 23rd paragraph isn’t weird enough, the link Kessler uses is to the same report we embedded earlier today. Why is that weird? Because it’s a Scribd document that was uploaded by Glenn Kessler. Now, most journalists, when they’re reporting a scoop like this, are not just required to, but are happy to take credit for obtaining a newsworthy document, and include some form of attribution. Kessler not only doesn’t say how he obtained the document, he doesn’t even disclose that he obtained it. All very curious.

So then, on Wednesday, Hillary Clinton releases an ad which promises “4 things Donald Trump Could Be Hiding in His Tax Returns,” one of which is that he paid no taxes for one or more years. At 9:45 am Friday, The Washington Post’s Drew Harwell publishes the week-old scoop, and 25 minutes later, the Clinton campaign sends out an “ICYMI” email with the full article. That story, at least as of now, does not contain a link to the Casino Commission report, nor does it cite Glenn Kessler’s reporting. Anyone in online publishing will tell you these are both extraordinary lapses, both journalistically and from a business standpoint.

There’s an almost-innocent possible explanation for all of this. Journalists often receive off-the-record pitches from sources that contain links and other information that can be independently verified, and that the reporter is expected to claim as their own research. It’s usually oppo, and any reporter who accepts such a pitch is obligated to dig into every angle of the story, but that doesn’t always happen. For example, if someone sent me a link to a video showing Donald Trump being creepy about his infant daughter, I could publish that without disclosing where the tip came from, just as long as I could independently verify its authenticity. I don’t use pitches like that unless I can negotiate some form of attribution, but some people do, and that’s okay.

The difference here is that Kessler doesn’t disclose how he obtained the report, and Harwell doesn’t either, and doesn’t even link to it. This is either a series of sloppy mistakes, poor editorial decisions, and coincidences, or an attempt to obscure the provenance of the story.