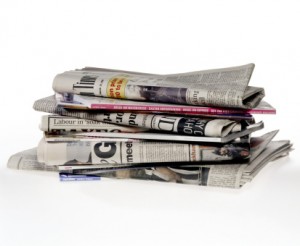 Another round has begun in the battle of Old Media versus New. MediaNews Group, Freedom Communications, and Swift Communications, the owners of some of the biggest newspapers in the Colorado area, have sent a Cease and Desist letter to ColoradoPols.com, a blog which, true to its name, covers politics in the state of Colorado. The letter accuses the blog of “flagrant and persistent theft of our clients’ intellectual property” by quoting articles from the various papers. This brings up the old argument yet again; do sites that perform news aggregation provide a valuable service, or are they just leeches stealing other people’s work?

In response, ColoradoPols have stopped quoting or linking to any articles written by those sources. They have also, however, consulted lawyers and written a lengthy explanation as to why they think nothing they have done is illegal.

From ColoradoPols (I’m assuming they won’t mind me quoting):

“First off, you can’t steal something that is already given away for free. This would be like Westword accusing you of stealing their newspaper by taking it out of one the FREE bins located all over town. We’re not going behind any paid system or other kind of firewall and offering up content that you would otherwise have to pay for online. We would understand complaints if we had been repeatedly cutting and pasting entire articles, but we’ve always avoided doing that and have made that point to other posters on multiple occasions.
Not only are we posting only a few paragraphs from stories THAT ARE ALREADY FREE FOR EVERYONE ONLINE, we have gone out of our way to name the publication, highlight the author in particular, and provide a clear link to the story. Legally speaking, we don’t actually need to do any of this, but we’ve always tried to be symbiotic Internet purveyors and give credit where credit is due (incidentally, the Post almost never links to us or even mentions Colorado Pols when we have a story before they do, which happens all the time, but we don’t go all “attack of the killer attorneys” on them). What’s more, the case law this letter cites pertains to some obscure spam site that was republishing AP news stories in their entirety without attribution. After the efforts we have always made to properly credit the cited publication as well as the story’s author in boldface, such a comparison is insulting in the extreme.

Second, the idea that The Denver Post or any other outlet owns “hot news” is absurd. Twenty years ago the only way you could get your local news was to subscribe to a newspaper or watch one of the network TV stations’ nightly news broadcasts. That, of course, is no longer the case. By and large, the stories that we have referenced from the Post are not “exclusive stories,” and thus they have no claim to the “hot news doctrine.” If we reference a Denver Post story about the winners at the state convention, we’re doing so as a way to quickly catch up a reader at Colorado Pols as to a subject we are about to discuss. But we could just as easily do the same thing by using another news outlet as the source, or by not using another news outlet at all. It’s not exactly a big secret when the winners are announced at the Democratic or Republican state conventions, and we get all the same press releases they do. We also get a tremendous amount of breaking news and inside information directly, just like the Post and other news outlets.”

A cursory look at the site shows that they do pass the Commentary Test (they don’t just republish wholesale, they quote, cite, and then add additional comment) and their legal arguments seem sound but this is such a tough argument. Print media is dying and the Internet is the main cause. Blogs quoting these sources is kind of like having your murderer kill you and steal and start wearing your clothes as well.

Which reminds me, do you guys think my sweet new Wall Street Journal jacket goes well with my Newsweek pants?