Concha: GOP-Led Report Means Benghazi Coverage Will Finally Be Put to Rest, Even on Fox 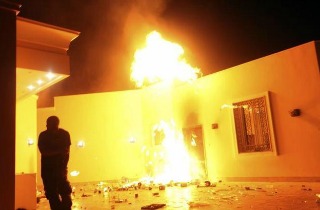 Mark the date down: November 21st, 2014 is the now the unofficial day the Benghazi story was–for all intents and purposes–finally put to rest, from a media perspective. That’s 803 days since the terror attack killed four Americans, including U.S. Ambassador Chris Stevens.

As you may have heard, despite it being part of a classic late Friday news dump, a Republican-led House Intelligence Committee found that while the attack on the consulate in Libya could likely have been prevented with better security and intelligence, and while administration talking points around a YouTube video being the impetus for said attacks were deemed “incorrect”, the CIA and U.S. military responded properly. It also states the Obama Administration didn’t attempt to mislead the public.

The bigger takeaway: also per the 37-page report, there was no stand-down order given to a CIA response team, the CIA received all U.S. military support available at the time in the region, and the military didn’t miss an opportunity to carry out a rescue operation. The stand-down aspect is an allegation lots of conservatives, some Fox opinion-makers (not all) and many talk radio hosts on the right have been most passionate about since the attack happened 26 months ago.

Of course, the first question asked in these kind of situations is always from the “What does it mean for ______?” category. In this case, that obviously applies to Hillary Clinton, the likely Democratic nominee. Truth is, absent of a smoking gun that likely may never materialize, this issue was never going to have any real effect on the 2016 race. CNN’s Erin Burnett got this right back in May: “All I have to say about Benghazi is what’s sad is that it’s become like abortion,” she said. “No one even listens anymore. It has become a thing where whatever side you take you’re just a polemicist.”

And it’s completely true. Either you believed from the start Benghazi was worse than Watergate (the “four people didn’t die in Watergate” line was a common sentiment) or you felt it was classic political hyperbole drummed up to hurt the president and Hillary Clinton, who ran the State Department at the time as Secretary of State.

Fox’s Charles Krauthammer cautioned that the issue was already DOA as a political weapon before the hearings began when he shared this perspective back in May as well:

“These hearings are a big political risk for Republicans. Going into the 2014 election, they stand to benefit from the major issues –Obamacare, the economy, chronic unemployment –from which the Benghazi hearings can only distract. Worse, if botched like previous hearings on the matter, these hearings could backfire against the GOP, as did the 1998 Clinton impeachment proceedings. On purely partisan considerations, the hearings are not worth the political risk.”

The hearings, however, have gone smoothly and have stayed well below the radar for months. For those who doubted Trey Gowdy’s (R-SC) ability to be fair and avoid the usual grandstanding seen in almost every kind of politically-charged hearing, doubt no more. Note: Mike Rogers (R-MI) chaired the just-completed house committee side while Gowdy heads up the ongoing House select committee hearings (below).

In retrospect, the Benghazi food fight between those in the red or blue cheering sections was only for all for those who live inside the bubble. I’ve said this on the air before and will say it again now: If you were to perform one of those person on the street interviews we see Kimmel or Howard or Watters do, many would still believe it if you told them Benghazi was simply the name of a hot new nightclub in town. It’s why I’ve never done even one column on Benghazi itself: The story–even with all the hours and specials outlets like Fox dedicated to it–just never really resonated with the casual American viewer… the kind who only follow politics for a few minutes per day, per week. Maybe it was too complex, too polarizing. Maybe it was the usual apathy and numbness when it comes to terror and conflict that occurs overseas. Whatever the case, it just didn’t penetrate the American pysche.

Yes, there is a separate investigation by a House select committee currently underway, and perhaps that will be uncover something we haven’t already heard (although you get the feeling that ain’t happening after two years and two months). So for now–and more likely, for good–Benghazi has been put to rest as a campaign issue. The political risks for whomever the Republican candidate eventually is clearly outweighs any upside of going after Mrs. Clinton on this, particularly if the ongoing investigation–which is focusing on the State Department role–comes back empty as well.

Absent a breaking development in the House select inquiry, it will go away quickly on Fox, just like Bridgegate did on MSNBC after the network went wall-to-wall for weeks on end only for it to disappear barely without a mention when reports began to leak that Chris Christie had nothing directly to do with it. Or…when CNN went nearly 24/7 on MH-370 before hitting a switch and making the story vanish from its airwaves just like the plane once did from radar.

This is how it works in today’s media. Benghazi is like Ebola: The next Black Plague one minute, gone like repeats of The Cosby Show the next.