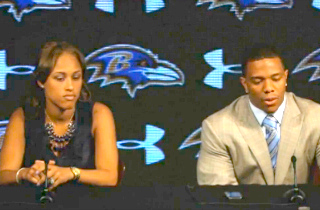 And so went down in history one of the most bizarre and compelling conversations you’ll ever witness on standard or high definition television. Here you had Tyson — the pre-rape-conviction, invincible version…the guy who was thought at the time to be better than Ali, Frazier, Louis or Marciano — sitting silently next to his beautiful wife as she calmly explained to the world just how screwed up her heavyweight champion of a husband was.

“Michael is a manic depressive,” Givens told Walters without a hint of emotion, who owned this kind of stage for decades during an unmatched career.

“Does he hit you?” Walters asked, as she nor Givens even glanced as Tyson as if he wasn’t there.

“He shakes, he pushes, he swings,” replied Givens. “Just recently I have become afraid. I mean very, very much afraid.”

Tyson just looked down at the floor. Again, bizarre and utterly riveting to witness.

Guess what? Givens filed for divorce just days after the interview.

Fast-forward 26 years later to the big story of the week out of Baltimore: An NFL All-Pro, Super Bowl winning running back strikes his then-fiancée (Janay Palmer) in the face, knocking her out, while on an elevator in Atlantic City. It is revealed weeks later that a video exists from inside the elevator (because casinos tend to have cameras anywhere and everywhere) showing the horrific act for all the world to see. Rice’s contract is terminated by the Ravens. The league–which claims to have not seen the tape before TMZ got its hands it–suspends him indefinitely. He may never play another down in the league. But then again, many said the same thing about Michael Vick.

Janay Palmer is now Janay Rice. The last 24 hours has undoubtedly been the most excruciating, humiliating, emotional days of her life. So needing to vent, to let it all out, she didn’t call Walters out of retirement. She didn’t seek Oprah or Ellen either. That would mean PR flacks getting involved and hype being attached to a conversation she would get to think about for a long time while preparing for it. Until such an interview, maybe she would be coached. Maybe her husband or family would talk her out of it. It would all only result in more pain.

Sometimes we all need to exhale. No filter. No instructions. Just pour it all out from the heart, 140 characters or less be damned.

And that’s what Janay Rice did today via Instagram. Read the full message here. You can debate whether she should leave her husband or not; whether she’s brave or stupid. As we’re seeing on cable news and ESPN today, everyone has an opinion on this one.

But from a big-get-interview perspective, social media just took away that chance to, as the likely promo with the serious music and dramatic voice would say, “…your chance to hear from Janay Rice for the very first time, as she speaks out about her marriage to who many are calling the most hated man in America.”

That’s not to say Ms. Rice isn’t still a huge get for any anchor/host looking for the ratings the victim refers to in her post. But social media — in this case, Instagram — just allowed Janay to share her feelings with the public from the privacy of her own home. No press conference with scores of cameras in her face. No makeup. No second thoughts about doing it. And given her utter disdain for the media, it appears unlikely she’ll be rushing to get in front of a camera anytime soon.

Mike Tyson and Robin Givens didn’t have that option.

A stunned audience got its so-called entertainment.

In 2014, it appears the subject who wants to get their story out doesn’t need the interviewer and the big network to do so.