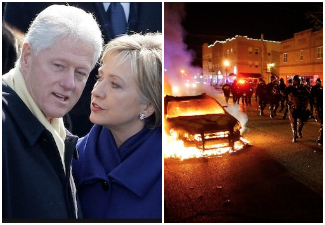 One is unofficially the country’s first black president. The other is potentially America’s first female president. Make no mistake…Team Clinton is a formidable pair and has been since the country was introduced to them 23 years ago when the former began an improbable run for the White House.

But while Team Clinton may be as powerful a tandem there is in politics today, they’re also the most risk-averse as well. Exhibit A occurred in August when Mrs. Clinton waited almost three weeks before finally commenting on the shooting death of Michael Brown. Even a prominent progressive member of the richest one-percent (Al Sharpton) called out the almost-certain future Democratic nominee, stating: “This is now a national, central issue and anyone running for President needs to come up with a formula or — in my opinion — they forfeit their right to be taken seriously.” When Hillary did finally speak out with a carefully-worded statement that garnered little attention simply because it was so perfunctory, CNN’s Marc Lamont Hill, one of the more thoughtful progressive pundits out there, put it this way: “Hillary Clinton’s statement reflects careful triangulation and calculation driven by political interest rather than genuine feeling.”

Exhibit B is happening right now, as Mrs. Clinton hasn’t uttered a word on the verdict and subsequent mayhem that followed on Monday night that everyone seemingly has been talking about since. There also hasn’t been a peep from the aforementioned unofficial first black president, who never met a microphone he didn’t like. And before you say this is some kind of conservative attack on Team Clinton, it’s worth noting that some liberal outlets are the ones calling them out right now. For example, the New York Observer calls Hillary’s silence “defeaning” in a Wednesday headline of a solid piece that briefly praises Sen. Rand Paul (R-KY)–who absolutely will be vying for the GOP nomination–for his candid assessment of his call for “reforms in the criminal justice system” and “issues related to drug use and poverty” that he says need to be addressed as well.

African Americans are a huge part of the Democratic Party base. It is extraordinary that the party’s second most visible leader does not see it necessary or helpful to speak out during a moment that is so important to so many African Americans. There are lots of things that can go wrong for a politician when she speaks out at during times like these, but taking risks defines leadership.

There are plenty of pundits who claim Team Clinton is unbeatable in 2016. Of course, these are some of the same folks who said the same in 2008, although some say she’s a horrible candidate. An argument can be made that the upcoming race will be even more difficult for Hillary, as there is no George W. Bush boogeyman to beat up on this time. The headwinds will be against her in the general election, with an unpopular, defiant president dragging her down.

No matter how much Hillary tries to divorce herself from a Democratic brand damaged by a big government philosophy solution to problems that have produced paltry results over the past six years, she will be linked in the same way John McCain was to Mr. Bush in 2008. For those looking for verification of this analysis, just look how fast Democratic candidates ran from Mr. Obama in the midterms. Hillary can attempt (and she is) to separate herself as well, but as we’re seeing once again via her silence on Ferguson for the second time in three months, this is a politician who simply doesn’t like to take chances and especially doesn’t care to be bold in any capacity.

Similar to last August, the country will (albeit eventually) hear from Team Clinton on Ferguson.

But polls and focus groups take time to gather its consensus. And when they do, you can bet–that as sure as there will be turkey leftovers today–Hillary and Bill will offer up the safest, least inspiring thoughts on the matter possible.

And on a lighter note, enjoy your Thanksgiving.