Concha: Why Haven’t the Clintons Helped Democrats Campaign to Keep the Senate?

Concha: Why Haven’t the Clintons Helped Democrats Campaign to Keep the Senate? 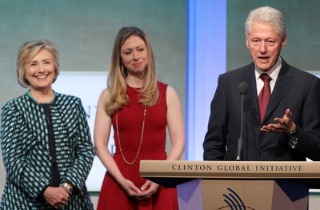 As the apocalyptic race for control of the Senate hits its final month, some notable figures have been missing from the scene to this point:

Iowa is one such race critical to Democrats, who will lose the Senate if Republicans can gain six seats. So there were the Clintons a few weeks ago at Tom Harkin’s annual steak fry event in an attempt to reintroduce to the likely Democratic presidential candidate to a Hawkeye state that dealt her first and most devastating defeat to then-underdog-candidate Barack Obama six years ago. Hillary–of course–isn’t officially running yet, and only said she was only there for the steak.

But while she was there, would it have been too much to ask to have her (or the former popular president) to raise a few dollars, generate some nice press or say a few kind words for Democrat Bruce Braley on behalf of the Senate campaign? He currently trails former Iraq war veteran Joni Ernst by just 2.2 points (Real Clear Politics average), and with President Obama toxic to any candidate–even in states he won in 2008 and 2012 (like Iowa), a Hillary and/or Bill boost (A CNN/Opinion Research poll released in September showed Mrs. Clinton owning a 38 point lead in the 2016 Iowa caucus) could tip the scales blue not only in the state, but overall race for control of the Senate as well.

Same goes for Arkansas, the Clinton’s home state. Democrat Mark Pryor now trails Republican Tom Cotton by 3.7 points (RCP average). Would a return of the man from Hope–along with his high-profile wife–generate some great fundraising opportunities for Pryor via a hoard of media descending on Razorback country? Of course. Is Hillary jumping on a plane to Little Rock in the next four weeks? Not on your life, although Bill will be there for the first time in a long time today.

So why would the most powerful team in the Democratic party allow these races–along with tight ones from Alaska to Louisiana to Colorado–to just fall the GOP’s way? Theories in both conservative and liberal circles point to what’s not ultimately best for the Democratic party, but for the Clintons when 2016 is brought into the conversation.

Per Jim VandeHei, chief executive of Politico on a recent edition of NBC’s Meet the Press:

“I think a lot of Democrats would (like to lose control of the Senate). They never say it in public, because everybody knows virtually nothing is going to happen over the next two years, and Democrats — Hillary Clinton in particular, would love Republicans, Rubio, Rand Paul to actually have to take ownership of some of the dysfunction.”

“Winning the Senate in 2014 will be a double-edged sword for Republicans. All else equal, it’s of course better to hold more seats than fewer. But all else isn’t equal. The internal pressures of the Republican Party are such that if Republicans win the Senate in 2014 they’ll probably chart a course that makes it likelier they’ll lose both the Senate and the White House in 2016.”

So despite the campaign season being in full swing for months now, will the Clintons–at least Hillary–jump in at the 11th hour? According to Politico, the answer is now yes (although when exactly remains in flux). The story states Mrs. Clinton won’t touch foot in Arkansas, mind you, but in states such as New Hampshire, North Carolina, Colorado, Georgia, Kentucky and the aforementioned Iowa.

But the timing is still odd. As Mitt Romney knows all too well, it’s how a candidate is defined early on is what’s most important. Money in the coffers to help shape a campaign counts for something as well in terms of setting the tone. Mrs. Clinton jumping in so late seems more like a perfunctory act than that of a willing participant. Democrats who once led (like Pryor and Bailey) could have used her name, her brand, her fundraising ability much earlier while they had somemomentum, not after when it may be a matter of too-little, too-late. Regardless, she hits the trail in six states on a date to be announced.

The iconic fashion designer Karl Lagerfeld once said that “Dieting is the only game where you win when you lose.”

Apparently the Clintons have seen the menu and are passing on the meal to this point that is the race for control of the Senate in 2014. If their absence until now in places and races like Iowa are any indication, their eyes are on a main course that takes place two years from now.

And if the GOP controls the senate, at least likely in the eyes of Team Clinton, all the better.