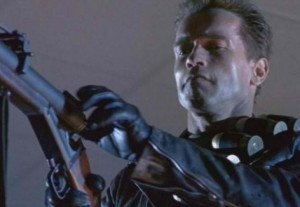 One of the persistent talking points to emerge from media discussion of the horrific mass shooting in Connecticut on Friday is the notion that, because Connecticut has some of the most strict gun laws in the country, the shooting demonstrates the futility of legislating against gun violence. The point is made explicitly by those who oppose enacting new gun laws, but is also implicit in pervasive mainstream media citation of Connecticut’s gun laws, and it ignores the far more rational conclusion that even our “strict” gun laws are miles away from where we need to be, as evidenced by the fact that “strict” Connecticut allows citizens to own an assault-style rifle with a grenade launcher.

That’s right, even according to Connecticut state law, which The Brady Campaign To Prevent Gun Violence ranks as 5th strongest in the nation, allows for the possession of a semiautomatic assault-style rifle with a grenade launcher, as long as it doesn’t also have one of these features:

You’re allowed to have any one of those features on your semiautomatic rifle, but not two of them, so if you want to fire bullets as fast as you can pull the trigger and launch grenades, and use a bayonet, you’re out of luck. Bullets and grenades, only. Thankfully, real grenade-launcher rounds are tough to get, but the launchers can also be adapted to fire shotgun shells.

The real point, though, is that characterizing Connecticut’s gun laws, or any U.S. gun laws, as “strict” sets up a series of wholly inadequate goalposts for the laws we hope to end up with as the “discussion” on gun violence continues, and it leads to a distorted view of this tragedy as it relates to the law, that the law is not an effective way to address it. On Saturday’s Up With Chris Hayes, host Chris Hayes threw out this idea in devil’s advocate mode, and gun control advocates Rep. Carolyn McCarthy (D-NY)  and Deputy New York City Deputy Mayor Howard Wolfson immediately folded like self-aware origami, and accepted the premise.

“Gun advocates are going to say, ‘In this case, we had three weapons in a state with relatively strict gun laws,'” Hayes said, “all legally purchased, registered to the mother. You guys are coming with your prepackaged solutions, which is to crack down on the laws, even though the facts in the case, as we know them, don’t manifest themselves as things that would have been prevented.”

Wolfson immediately pivoted to inner-city violence, saying we should care about, and legislate around, gun violence against children “regardless of the circumstances around their shooting.”

Rep. McCarthy allowed that “we cannot save every single person,” but that doesn’t stop you from trying, and that “maybe in this case, there might not have been anything that we could have done,” although she did raise the issue of large-capacity magazines:

We shouldn’t surrender so quickly, or at all, to this logic-defying argument. If an arsenal like this can be legally deployed in a state with “relatively strict gun laws,” then the natural conclusion should be that we have no idea what the words “strict gun laws” mean. Whatever the solutions we arrive at (quickly, I hope), we must begin with agreement that tragedy of this scale can be prevented, or at least mitigated, and we must be prepared to challenge basic assumptions about gun ownership, like why any civilian even needs to own a firearm with a detachable clip, let alone an extended magazine. Is convenience at the target range or the hunting grounds worth this potential risk?

We don’t know enough about the details of this shooting to formulate comprehensive policies around issues peripheral to guns, but we know for sure that the guns are a problem. Even if there turns out to be a strong mental health component to this, caring for the mentally ill, while a desirable goal, is like screening out a needle from a haystack when it comes to preventing shootings like this. We should get to that haystack, but right now, we need to deal with the haystacks made of guns and bullets, and we need to attack them with a big-ass pitchfork, not a set of tweezers.

That is not to say that we should throw out the Second Amendment, or that we can’t respect it while we work this out, but we need to change the way we think about it:

A well regulated militia being necessary to the security of a free state, the right of the people to keep and bear arms shall not be infringed.

Obviously, we already recognize limits to the term “arms,” but when our founders passed this amendment, here’s how long it takes to load a musket:

Three shots per minute might not seem like a realistic place to begin this discussion, but if Connecticut is what we call “strict,” it makes a hell of a lot more sense than starting at “grenade launcher.”