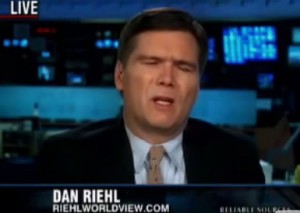 It has become an almost tiresome game to tabulate and record the classless reactions of those on the left or the right when a political figure meets with mortal peril. Whether it’s conservatives celebrating Ted Kennedy‘s death with animal feces, or liberals crossing their fingers for Rush Limbaugh‘s chest pains to take a wrong turn, it’s apparent that ghoulish attention-seeking is not limited by political ideology. With that fact well-established, I had decided to recuse myself from this pastime, until I saw conservative blogger Dan Riehl‘s vile take on Senator Harry Reid‘s wife, Landra, and her recent car accident.

It’s so vile, in fact, that I’m having trouble zeroing in on a particular quote. Let’s start with this one:

If Democrats want so badly to abort babies because of (healthcare costs), why are we bothering with someone who has a broken neck and back at 69? It sounds to me like she’s pretty well used up and has probably been living off the taxpayers for plenty of years to begin with. Aren’t we at least going to get a vote on it?

Read the whole thing on an empty stomach, if you must. What takes the cake, though, is that when Media Matters gives him the attention he so desperately wants, he has the stones to feign outrage. Just say “Thank you.”

Before any of you even start, please spare me the “satire” excuse. This isn’t about the logical merits of Riehle’s metaphor, although even by that standard, his post is a miserable failure. It is about gratuitous cruelty, in service to the almighty hitcount. His title entreaty veers dangerously close to incitement, as well. We’ll all cross our fingers that none of that hospital’s staff reads Riehle’s blog.

In fact, I hate to even give the guy traffic, but I do hope that if you decide to check it out, you let him know what you think. I also hope that the bookers at news organizations keep this in mind next time they’re mulling a Riehle guest spot.

The point here is not to vilify conservatives. In all of these situations, the vast majority of people on each side react with decency. Obviously, though, there is some reward for those who exploit tragedy to score snarky points, or they wouldn’t keep doing it. Riehle, for example, wears Media Matters’ denunciation like a badge of honor. The message that humanity doesn’t stop at the imaginary border between left and right needs to be delivered to these people by someone they care about.

Update: As Riehl points out, I added an “e” to his name 3 out of 4 times in this post. I regret the error, and thank him for pointing this out.  Keep him in mind if you ever need a copy editor.