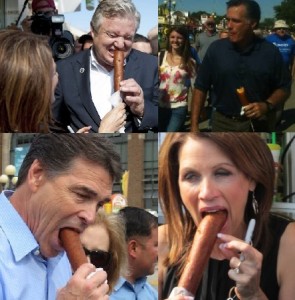 The Center of the Political Universe this past week, Iowa, produced great quantities of news (of debatable value), and while the biggest culinary star to emerge from the festivities was the Iowa State Fair’s deep-fried butter on a stick, conservative sites are noting that it’s the corndog who is getting the most face time in news photos with Republican candidates. Is this fascination with phallic foodstuffs merely immature, or does it reveal something deeper, and perhaps even hateful?

The UK Telegraph drew fire (particularly from Mediaite’s Frances Martel) for its publication of a porn-tastic photo of Rep. Michele Bachmann that was undeniable in its ugly sexism. Bachmann’s husband, Marcus, was also photographed taking a first bite of Bachmann’s corndog, and Mitt Romney was snapped toting a half-eaten dog. It was the photo of Gov. Rick Perry tearing into one of the crunchy, meaty treats, though, that was the last straw for some conservative bloggers.

Ace of Spades overstates things a bit when he calls the corndog mini-parade “an issue of liberal bias,” at least as far as the mainstream media is concerned. The Bachmann photo was published by a foreign newspaper, and the Romney snapshot was put out by his own campaign.

However, Hot Air blogger Howard Portnoy is closer to the mark with his assessment of the liberal blogosphere’s use of these photos:

In yet another bald attempt to capture a GOP candidate in an unflattering light, the liberal blogosphere has obtained a photo of Governor Rick Perry chowing down on a corn dog. At least the photo seems to put to rest earlier charges that a similar snapshot of Michele Bachmann was sexist.

Portnoy is correct that these photos are being used by some liberals to capture GOP candidates in an unflattering light, but the Perry photo doesn’t mitigate the sexism of the Bachmann photo in the slightest, it aggravates it.

We all get it, the corndog looks like a phallus, and transferring it from Bachmann’s mouth to Perry’s simply morphs the subtext from sexism to gay-baiting. Anyone who respects the right of individuals to determine their own identities, rather than have it dictated to them, ought to find this sort of thing abhorrent. If we really do believe that people have the right to do whatever they want with their mouths, then what’s so funny about these photos?