Conservative Media Watchdog Accuses Telemundo of Staging the News — So Did They? 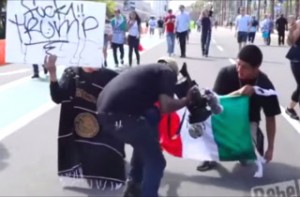 The president of the conservative media watchdog Media Research Center (MRC) is demanding that Telemundo fire a cameraman they claim was staging shots at an anti-Trump protest and apologize to Donald Trump for failing to cover his campaign objectively.

In a statement released on Wednesday MRC President Brent Bozell alleged “that there is evidence of a deliberate attempt to stage the news — a clear case of advocacy replacing journalism on the campaign trail.”

“Telemundo must immediately apologize to Donald Trump, fire the cameraman and anyone else involved in order to retain their viewers’ trust and confidence. No one trusts any supposedly fair media outlet that chooses one side or one candidate over another,” the statement concludes.

The alleged staging that Bozell refers to was caught on video by filmmaker Andrew Marcus and subsequently appeared on the blog Rebel Pundit. It was reposted on Newsbusters, the MRC blog launched in 2005 “to provide immediate exposure of national media bias, unfairness, inaccuracy, and occasional idiocy,” according to the site.

In the video (viewable below) a cameraman wearing a Telemundo Mexico t-shirt seems to ask two protesters in a march to stop, unfurl the Mexican flag that one of them is carrying, and pose holding the flag between them. It’s difficult to hear what, if anything, is being said.

When the protestors initially unfurl the Mexican flag, it is being held the correct way horizontally from their point of view (from left to right: green, white, red), but the incorrect way vertically (with the National Coat of Arms of Mexico in the center facing down). The cameraman points to the flag and makes a gesture indicating that the protesters need to flip it. After they don’t seem to understand, he leans in and holds up a corner of the flag.

The cameraman replies, “Uh, probably,” and later identifies himself as “media,” and “not part of the protest.”

“I’m wondering why a journalist would be staging you guys,” Marcus says to protesters later.

Ken Oliver-Méndez, the director of MRC Latino, confirmed in a phone call that the “deliberate attempt to stage the news” alluded to in Bozell’s statement referred specifically to the cameraman’s move to adjust the flag.

Asked to clarify exactly what narrative or political viewpoint was being advanced by making sure that the Mexican flag was oriented correctly, Oliver-Méndez responded that the problem was that a principle had been violated.

“There’s a fine line between covering the news and creating the news,” he said, adding that it was “out of bounds professionally” and “disturbing to any legitimate journalist” to witness a member of the press working with the protesters to arrange the shot the way he wants.

In a tweet, Oliver-Méndez described the episode as “A self-inflicted wound on Telemundo’s credibility.”

In a statement Telemundo gave to the MRC, who shared it with Mediaite, the network said that “the integrity of the broadcast was not compromised since the material was not used by the Network news team.”

Oliver-Méndez said that Telemundo’s statement implicitly admitted that the footage seen being captured by the cameraman, if used, would have compromised the “integrity” of their report.

The network also confirmed that the cameraman seen in the video was a temporary worker hired to help cover the San Diego and Tijuana area.

Asked for clarification, Telemundo would only say that it was sticking to its original statement. An email to the local Telemundo affiliate station covering San Diego and Tijuana was unreturned.

Rebel Pundit, the outlet that originally published the video, says its mission is “exposing the true nature of liberalism and the toll it has taken on regular peoples’ lives.” Asked if there was any contradiction in accusing Telemundo of advocacy journalism, while relying on reporting from a nakedly partisan source, Oliver-Méndez said that MRC appreciated contributions from both left- and right-leaning sources. He said that the real import was what Marcus captured with his camera, not necessarily his point of view.

He added that the incident was reflective of a disquieting trend of Spanish-language news networks, such as Univision and Telemundo, consistently putting forth an anti-Trump position in their reporting. However, he acknowledged that this was the first time a network had been caught actively “colluding” with anti-Trump protesters.

Telemundo told MRC that the network is “known for its balance and accuracy,” and that it “did not, nor would it ask any full-time or temporary worker to stage events.”

Reached by email, Marcus, the videographer, said that “Telemundo should apologize to their global audience and especially to Americans for failing to properly train their reporters on the difference between reporting news and staging it.”

Unlike the MRC, he maintained that the manipulation went far beyond merely adjusting the position of the Mexican flag.

“These individuals he stopped and posed for his camera were part of a mob of protesters harassing people exiting a political speech. Did Telemundo show that footage or did they just show beauty shots that made menacing protesters look like wholesome Mexican patriots?” he asked.

Marcus claimed that the anti-Trump protesters were harassing the candidate’s supporters as they were exiting a rally, pursuing them down the street as they tried to leave the venue, while shouting at them and tearing up their signs. Marcus said he was capturing these activities when he noticed the cameraman stopping the protesters and “staging them for a photo-op.”

There’s nothing in the footage posted to Rebel Pundit and Newsbusters that shows protesters accosting Trump supporters in the manner Marcus described. However, after Marcus’ confrontation with the cameraman, one protester intentionally blocked his shot; another called him “puta.”

“These individuals were part of a mob harassing people exiting a political speech when Telemundo stopped them for a beauty shot! That’s staging a total lie,” he said.

Asked exactly where the cameraman crossed the line between filming the event and intervening in it, Marcus said, “He crossed the line when he stopped the protesters and asked them to pose for his camera. He waltzed and tangoed all over the wrong side of the line when he had them adjust the Mexican flag which they were holding upside down. But he was taking a big steamy dump on both sides of the line by staging a beauty shot using members of a menacing mob of protesters. That’s offensive to the truth of the moment he was alleging to capture.”

“It’s not enough to simply say ‘we don’t condone the actions of this reporter and we didn’t use the footage’. Telemundo should dig into their training practices and determine where the breakdown occurred, because now the logical questions are, how many times has this happened before?” he said.

As to whether or not the cameraman should lose his job, Marcus said, “The fate of Telemundo’s employee is up to Telemundo.”

In the video, the cameraman can be heard offering his own rejoinder to Marcus’ charges: “Fuck you, man. I need to work.”

You can view Marcus’ video of the incident above.