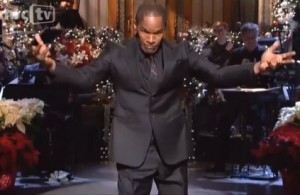 Conservative media watchdog Newsbusters is the Napa Valley of fine conservative media whine, but every one in awhile, they produce a vintage so fine, it demands to be shared. Newsbusters editor Noel Sheppard, who warned CNN’s Don Lemon of an impending race war earlier this year, was sent running for the Archie Bunker this weekend by Jamie Foxx‘s opening monologue on Saturday Night Live, in which he jokes about getting to “kill all the white people” in his new movie, Django Unchained.

Before you start hiding your womens, however, it’s quite possible that Foxx was joking (it’s in the headline), and that he doesn’t really think killing white people is great, even for his lord and savior, Barack Obama (also a joke).

For those of you who think the only thing missing from Saturday Night Live is a snazzy musical bumper and a transcript, Newsbusters has you covered:

See, the recurring punchline (or “punch”) to Foxx’s series of interrelated witticisms (or “bit”) is “How black is that?” The humor is derived from its use in satirizing racial stereotypes, and in the case of Foxx’s kill the white people joke, racial anxieties. Or, as Sheppard explains:

How does it help race relations in this country when a black actor jokes on national television about killing white people?

Wait, that’s no explanation, that’s a question. Okay, Mr. Sheppard, two can play that game. How does it hurt race relations in this country when a black actor jokes on national television about killing white people?

Imagine the uproar if a white actor joked about killing all the black people in a new film he was starring in. That would probably be the end of his career.

Well, not if the punchline was “How white is that?” The joke works either way.

By contrast, for Foxx, this will probably win him another Oscar.

In mocking Newsbusters, Wonkette‘s Rebecca Schoenkopf went with the headline “NEWSBUSTERS: KNOWN BLACK MAN JAMIE FOXX USHERS IN GRAVE NEW WORLD WITH JOKES ABOUT WHITE PEOPLE,” which shows she obviously doesn’t read Newsbusters enough. Noel Sheppard apparently does, though, because he capped off his post with this seldom-used disclaimer:

ASSOCIATE EDITOR’S NOTE: Vulgar, racist, obscene, or threatening comments are not allowed at this website. Any such will be removed with the guilty party banned. Your cooperation is greatly appreciated.

It pays to know your audience.