‘Crazy’ vs. ‘Liar’: Voters On The Street Reveal Unpredictable and Uncensored Opinions On Trump vs. Clinton
Opinion
video

‘Crazy’ vs. ‘Liar’: Voters On The Street Reveal Unpredictable and Uncensored Opinions On Trump vs. Clinton 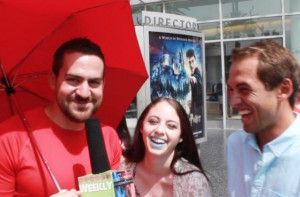 With the political conventions now in the rearview mirror, both Donald Trump and Hillary Clinton attempted to redefine themselves in the eyes of the American public. Did the two most unlikable candidates for President in recent memory succeed in creating a more positive image for themselves?  Judging from the video below, I’d say both candidates still have a lot of work to do.

I hit the streets of Hollywood Boulevard in Los Angeles, California to interview the folks, and ask them which political convention they preferred and what their general thoughts are on the 2016 race for the White House. The level of hatred for both candidates was somewhat shocking, but the rationale behind their dislike was consistently unpredictable and entertaining.

Some of the words voters used to describe the candidates: “Thief,” “Dumbass,” and “Devil!” Yet when forced to choose, “experience” and “jobs” were some of the strengths they cited in each candidate. And no one held back their true feelings, since I interviewed them under “The Umbrella of Truth,” which makes it metaphysically impossible for someone to lie when interviewed underneath it. Hey, everyone needs a gimmick, right?

And make sure you watch until the end when the gloves come off and I humorously play devil’s advocate with some critics of Trump. When one Trump hater angrily yelled at me “how can anybody think that dude is anything but a [expletive deleted],” I just prayed he wasn’t a regular Mediaite reader.

Watch the anything-goes, crazy man on the street interviews above.