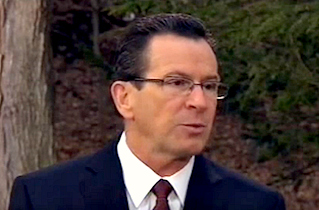 Democratic Connecticut Governor Daniel Malloy announced Thursday that he would waste millions of taxpayer dollars defending an action that would almost certainly be overruled at every level of the U.S. judicial system.

Of course, he didn’t exactly phrase it that way. Instead, he announced that he would issue an executive action banning the purchase of guns or ammo by anyone on a federal government terrorism watch list, including the “no-fly list.” But the end result is the same; Malloy’s new executive action is going to be laughed out of court.

To begin with, Malloy almost certainly lacks the ability to introduce drastic gun control measure by fiat. Executive actions in Connecticut, as at the federal level, can clarify interpretations of existing law. But the governor cannot create new law; that power lies with the legislature and the legislature alone.

In this case, Connecticut law is clear; Sec. 29-28(b) lists ten reasons why a Connecticut resident can be denied a gun permit, including mental illness, criminal history, being in the country illegally, having a restraining order against them, etc., but nothing about government watch lists. Those ten reasons, and those ten reasons alone, are the only reasons someone can be denied a gun in Connecticut. Every time the legislature deemed that additional disqualifications were necessary, they passed a law.

Of course, for a reform Malloy describes as “common sense,” it’s not clear why he wouldn’t just pass a law through the Democratically-controlled legislature (which jumped at the chance for more gun control following Sandy Hook) and avoid that particular legal hurdle. A cynic might wonder if Malloy wanted to take sole credit for the action, and whether the fact that he’s deeply unpopular in his own state has something to do with all this.

So yes, on this basis alone, Connecticut is going to get hammered in court. But even if Malloy had gone through the legislature like he was supposed to, it’s likely that the law would eventually be found unconstitutional anyway.

Under both the United States Constitution and the Connecticut Constitution, citizens have the right to due process. If the government wants to strip you of your rights, they can do so… but only after giving you a fair trial or another avenue to argue your case. Every American is innocent until proven guilty.

Government watch lists like the no-fly list– where government bureaucrats can add names to the list without oversight and aren’t even required to give a reason why you’re on the list— simply don’t meet that standard. Mistakes are rampant: The Weekly Standard‘s Steve Hayes was famously added to the list because he bought a one-way ticket to Turkey (his flight home was in a different country). After months of fighting to have his name removed from the list and being stonewalled at every turn, he was finally only granted relief when his Fox colleague Bret Baier asked about his case during an interview with Homeland Security Secretary Jeh Johnson.

Most of us don’t have friends who can shame the DHS Secretary on live television. And unlike flying in a commercial jet, the U.S. and Connecticut Constitutions both grant citizens the right to keep and bear arms.

Unfortunately, some on the left, led by President Barack Obama, seem to have some difficulty grasping this point. “What could possibly be the argument for allowing a terrorist suspect to buy a semiautomatic weapon?” he asked during his national address Sunday.

There are countries where the mere suspicion of wrongdoing is grounds to strip the citizenry of every right they hold dear. Thankfully, we do not live in one. In the United States, the government has to prove that you’re guilty of a crime before depriving you of your rights, and that requirement does not disappear just because the president or governor is contemptuous of the right in question.