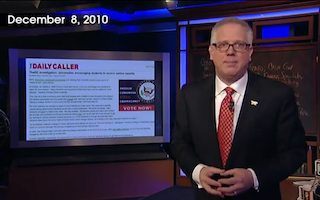 It seems that, every few months, we get a big fight with media figures accusing each other of not sourcing each other enough. The latest Battle of Hat Tips however, features a genuine TV star wearing the hat; Glenn Beck. The Daily Caller, this morning, took the first shot in a lengthy “exclusive” quoting from such notable Conservative bloggers as Andrew Breitbart and Pamela Geller accusing Beck of using content from blogs on his TV show without giving proper credit.

Here’s a sample from the Daily Caller:

“By any standard, Beck seems unusually reliant on the work of others, and unusually reluctant to credit it. In an interview with TheDC, Roger L. Simon, CEO of Pajamas Media, suggested that Beck has committed the journalistic equivalent of a notorious crime. ‘It is not a question of just doing it right the majority of the time. It is a question of doing it right always,’ Simon said. ‘Doris Kearns Goodwin is forever a fraud in my estimation because she has been caught plagiarizing once. If you rob a bank once, you still robbed a bank.’

A remarkably large number of conservative writers say they feel robbed. During the March 18 airing of his television program, for example, Beck ran a portion of video created by a Chicago-based blogger who calls himself Rebel Pundit. The blogger, who does not publicly reveal his name, says he was initially pleased to see Beck running his video, which featured left-wing protesters demanding amnesty for illegal immigrants. He was soon shocked, however, to see that Beck’s staff had obscured the watermark logo of his website, RebelPundit.com, from the tape.”

Below is one of the videos that the Daily Caller says is showing Beck stealing content (in this case, they say the story originated from Pamela Geller’s blog here) :

An accusation of content theft is damaging for any journalist, especially someone like Beck who prides himself on his show’s research and mentions at least once an episode the the tireless efforts of his small team. Not only that, there is definitely an air of “Enemy to the Movement” style accusations in the Daily Caller piece, from its headline (“TheDC Exclusive: Conservatives hit Beck for taking content without attribution”) to a section where they describe an example as one “even famously liberal CBS News credited.” The message being that Beck (and by extension The Blaze) is damaging to “real” Conservatives. Certainly not an opinion that would be good for business.

Speaking of business, is that what this is all about? The Blaze has released a video cutting together a number of examples of Beck citing bloggers on his show. The Daily Caller piece, however, has a response to that built in already, with most quotes from Beck’s accusers taking the form of “Yeah, he cites me sometimes, but that doesn’t absolve the times he doesn’t.” Because of this, it’s unsurprising that, in the post containing the video, The Blaze promises a more detailed response later which will discuss what is “motivating” the attack. From that phrasing, we can only imagine that The Blaze will accuse The Daily Caller of merely trying to get payback against a competitor (keep in mind The Blaze’s big takedown of James O’Keefe’s NPR video which originated on The Daily Caller). If that’s the tactic Beck’s team takes, it wouldn’t be a tough argument to make.

Beck also received some defense from an unlikely source. Salon has written up the Daily Caller piece, arguing that Beck is doing nothing that MSNBC, The New York Times, and The Daily Show (which, of course, are all potential Daily Caller targets) don’t and saying that “whatever defensible point the Caller might be making is betrayed by some silliness at the end,” pointing out that the Caller quotes author Mark Levin who accuses Beck of using ghostwriters. As Salon’s Alex Pareene explains, Beck does use ghostwriters, but he also credits and pays them, therefore there’s really no connection to the other claims. Of course, Pareene ends the post by saying Beck should be ashamed of not citing the “crazy” people he borrows his “fantastical nonsense” from, so it’s not exactly a full defense.

These are big accusations that The Daily Caller has made and some of the evidence they’ve amassed seems pretty damning. Especially considering the clear implication that Beck and his website are not working with (and are therefore not a part of) the Conservative mainstream. However, we’re curious whether that result was the Daily Caller’s impetus in writing the article in the first place. What do you think? Does the Daily Caller set up a good case against Beck? Or is this just a case of sour grapes amongst rivals?

Below is The Blaze’s video response. You can read the full Daily Caller and Blaze posts here and here respectively.

UPDATE: Here’s an interesting new side to the story. In response to Daily Caller’s piece, Jeff Dunetz at YID With LID has posted an email conversation he had with DC’s Matthew Boyle about whether or not he would like to contribute a story to the article. When Dunetz responded that stealing without attribution was more something he thought Bill O’Reilly was guilty of and defended Beck, Boyle never used his quotes.

Now, this doesn’t really mean anything. A story is a story and, if the fifth guy you contact doesn’t give you the information you want, you go with the first four. However, Dunetz is certainly positioning it as evidence that this was a Beck hit job.