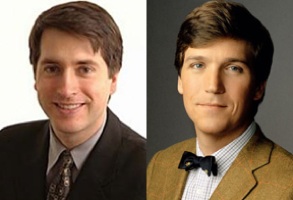 In a country club version of the Hatfields and McCoys, Tucker Carlson of the Daily Caller and Rich Lowry of the National Review stepped up their online feud over allegations made by the scrappy start-up that the folks at National Review were working with Republican lawmakers to promote the “Pledge to America” in a gushing editorial in the magazine.

The folks at National Review Online immediately rejected the allegations and went on the attack, questioning Ward’s reporting.  Lowry, still fuming over the allegation, continued to attack Ward and the story over the weekend.

Carlson returned fire today, saying “National Review has taken sides, providing ideological cover for the party’s establishment wing at a critical moment. We think it’s worth knowing a lot more about that arrangement.” Carlson is standing by the reporting, saying the National Review editorial was being handed out by Republican aides before the editorial was available publicly.

In response, Lowry attacked Carlson’s credibility and explained the time-line that led up to the editorial.  National Review, Lowry said, had an embargoed version of the Pledge having given a conditional thumbs-up earlier in the week. Once the embargo was broken, the magazine readied its editorial for release and that’s why Republican aides had it in their hands before the GOP caucus even got an official copy of the Pledge.

Lowry also makes his own accusations, suggesting that Daily Caller was modifying its story online with notifying readers and that the clarifications were being made in response to defenses being made by the National Review gang.  Ben Smith at Politico outlines the allegations and shows the changed copy.

The slap-fight between the conservative outlets underscores the current battle within the conservative movement between the party establishment–National Review–and the Tea Party insurgents–Daily Caller. Accusing the National Review of being in-bed with the Republican party is a nice way of separating the elites from the grassroots, although the fact that the surrogates are both movement insiders makes the rhetoric less impressive.

From the sidelines, the spectators at the feud are enjoying the rumble. Greg Sargent at the Washington Post’s Plum Line scolds that “[t]he next time the Daily Caller publishes a ridiculous trumped up “expose” about Journolist, or any other ridiculous trumped up expose, here’s hoping respectable Republicans and conservatives, not to mention other right-leaning media outlets like National Review, won’t be so quick to play along.”

The New Republic’s Jonathan Chait is also piling on the Daily Caller, saying “the story provides zero evidence — not even vague characterization — that the contact with NR was anything more than a routine spin session. And given the Daily Caller’s record of utter contempt for basic journalistic norms, the very strong presumption should be that this is a non-story.”