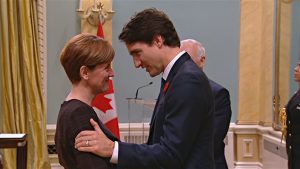 On Thursday, the conservative Daily Caller published an article taking the comments of a minister to Canada’s Justin Trudeau wildly out of context.

In an interview with Trudeau’s development minister Marie-Claude Bibeau, Bibeau offered detailed and nuanced commentary about abortion and making it more available to low-income individuals, but all the Daily Caller included from this interview before jumping to the comments of an anti-abortion bishop was that Bibeau had called abortion a “tool to end poverty.”

In including just this line and no other context, the intent was transparently to falsely portray the abortion rights movement as a classist movement to eradicate the poor. As with all conservative takes on reproductive justice that portray abortion rights proponents as classist eugenics supporters, it’s hard to know where to begin in unpacking just how inaccurate and deceitful this is.

Firstly, if any of this sounds familiar, that’s because it is. Birth control activist and Planned Parenthood founder Margaret Sanger is consistently, falsely portrayed as a racist supporter of eugenics and committing genocide against black communities, when Sanger was actually an advocate for making birth control and contraception equally available to wealthy white women and to low-income African-American women and immigrants.

In the same vein, Bibeau is calling abortion a “tool to end poverty,” suggesting that it should be as available to low-income women as it is to financially stable women, because women of all socioeconomic statuses deserve to have the same reproductive options. And don’t even get me started on the hypocrisy of welfare “family cap” supporters calling abortion rights advocates “classist” for wanting the procedure to be available to low-income families.

Equally hypocritical are the conservatives who dare to say abortion rights advocates hate poor people and children, all while said conservatives are the ones who support dismantling the social safety net and stripping 22 million Americans, many of whom include poor families with sick children, of health care.

Abortion rights advocates understand that reproductive justice isn’t just about empowering women and families with the autonomy to choose to not have children — it’s also about empowering them with the autonomy to choose to have children. Advocates recognize bodily autonomy as a fundamental human right, whether it means having children or not having them, and fundamental human rights can’t be accessible only to people who can afford them.

And lastly, let’s take a look at what Trudeau’s development minister really said about abortion:

In other words, the real objective Bibeau is talking about is equality and giving women of all socioeconomic backgrounds rights and autonomy — contraception and abortion are merely a “tool” to get us there. Bibeau has also previously noted how a key reason “adolescent girls stop going to school is because of early pregnancy” as a result of lack of reproductive options, which goes on to preclude these teenage girls of the same opportunities as their male counterparts.

That’s certainly not the message you’d get from reading The Daily Caller‘s coverage of this interview.