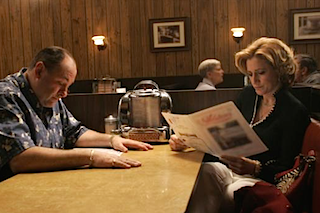 Earlier this year, The Sopranos creator David Chase briefly crashed the internet by telling Vox that Tony Soprano did not die at the end of the iconic HBO series. It was the first time Chase had answered many fans’ burning question definitively, but now that he got that off his chest, he has more to share.

In a podcast interview with Grantland’s Andy Greenwald released late last week, Chase discussed why he decided to keep his main character alive and what it has to do with his feelings about George W. Bush and Dick Cheney.

Chase said he found it “nauseating” that people simply wanted to see Tony “with his face down in a plate of linguini” especially after spending six seasons “cheering on” all the horrible things he did. “I just saw this typical idiot in his living room somewhere, just saying that, and it irritated me,” he said. It would have been too easy for Tony to have simply “paid the price” in the last moments of the show.

“We made that show during the Bush/Cheney years, and we were all seeing a lot of terrible things go unpunished,” Chase explained. “Corporate malfeasance, political machinations, unjust war. So, I don’t know how I was supposed to make Tony Soprano pay for all the bad things he did when I didn’t see anyone else paying for what they were doing.”

So there you have it. Not only did Tony Soprano not die at the end of The Sopranos, but you have Bush and Cheney to thank for keeping him alive.

Listen to audio below, via Grantland:

And you can hear the full interview at grantland.com.