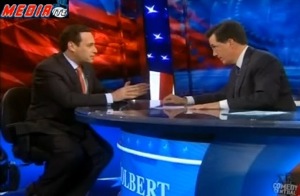 Former Bush speechwriter David Frum appeared on The Colbert Report last night to discuss his firing from the American Enterprise Institute for daring to tell the truth about the GOP’s defeat on health care. He rightly corrected host Stephen Colbert‘s assertion that he was a conservative “apostate,” but that’s probably Frum’s biggest problem right now. Conservative apostates can still make a living, but nobody wants a conservative heretic.

Frum’s problem becomes evident when he begins to explain why health care reform was a bad idea:

See, he still wants to be a conservative. That really cuts down on his job prospects. If he was a true apostate, he’d be the toast of the liberal blogosphere, telling appreciative millions how he’s seen the light.

Instead, Frum finds himself part of a small, lonely crowd. Christopher Buckley, himself ostracized for his endorsement of Barack Obama during the 2008 campaign, says that his late father (and modern conservatism’s father) William F. Buckley would agree that firing Frum was a mistake. That may be true, but this is not your father’s GOP. Buckley himself was forced out of The National Review, the magazine his father founded, just days after that endorsement of Obama. If his dad were still alive, a defense of Frum might even land him on the GOP’s blacklist.

Colbert hits the nail on the head when he compares the GOP to a cult. The 2008 election, and the health care debate after, saw the Republicans increasingly whipping up and harnessing the energy of that fringe that Frum spoke of. The big difference now, though, is that it is the cult’s followers who are offering the Kool Aid, and the cult’s leaders who must now drink.

Still, these are unique times. With the GOP pursuing its promise to run on repealing health care reform, and with today’s encouraging job numbers, Frum and I could look like geniuses come November. That’ll be good for me, but what it does for Frum is anyone’s guess. If November goes badly enough, maybe the Republicans wake up and start listening to voices like Frum’s. More likely, though, is that it will actually increase Frum’s radioactivity. Nobody likes to hear “I told you so!” He can always join Buckley and Meghan McCain at The Daily Beast.