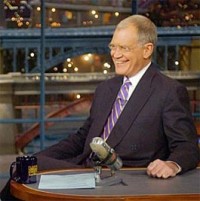 The media world – and just about everyone else for that matter – is all abuzz this morning over David Letterman’s revelation last night that he was being extorted for $2 million over the fact he’d had sex with women who’d worked for him. It is perhaps a measure of how well his viewers felt they knew him, and how successfully he portrays himself as an everyman that people were apparently shocked at this disclosure. Since at the end of the day (so far) all the story is is that Letterman — who was only married last March…to a woman who had worked for him at one time — had sex with women who worked for him. This is vastly different than, say, if Letterman was married and/or facing sexual harassment charges. As Donny Deutsch so aptly put it on Morning Joe this morning: “Do you think as you go around this newsroom there aren’t people having productive personal relationships?” On the scale of the sex scandals that have been recently dominating the headlines — Polanski, Ensign, Sanford — this is pretty tame.

Anyway, what Letterman’s disclosure did make for was some serious must-see TV. Also, hello ratings! But it’s certainly not the first time Letterman has grabbed the morning after spotlight due to shocking behavior. Here’s a look at our Top Ten Most Shocking Late Night Moments.

Back in the mid-nineties (and before!) it was enough to drop a few f-bombs on (pre-recorded) TV to get yourself in the next day’s top news (and the day after that, and the day after that). Madonna managed to drop so many during her infamous 1994 appearance there’s an entire wikipedia page devoted to the event. That said, Letterman’s introduction of her as someone “who had slept with some of the biggest names in the entertainment industry” was sort of begging for a comeback, and boy did he get one!

Andy Kaufman’s explosion on Letterman in 1982 has by now reached iconic television moment status. And for good reason, it is hysterical.

>>>NEXT: Women who strip for Letterman!