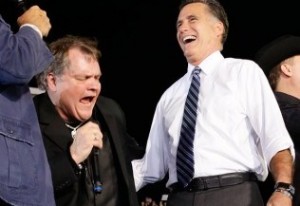 “If he were to win, you might have, say, Kelsey Grammar or Jon Voight, but that’s not money you can make off the photographers,” said Young. “You’re not going to have the Eva Longoria, Jennifer Lopez, Will Smith, the big name A-Listers who come and support Barack Obama. … You’ll have to travel or maybe you’ll have to find something totally different to shoot.”

Photographer and autographer collector Mark Wilkins said a Romney administration would “bring back the same old boring celebrities we saw back when Bush was around.”

“Trace Adkins, all those country stars that no one really cares about,” said Wilkins. “I hope Romney doesn’t get elected because it will slow things down. Right now there are celebs visiting the White House, four, five times a week that we don’t even know about until after they leave. Romney? Who wants to visit Romney?”